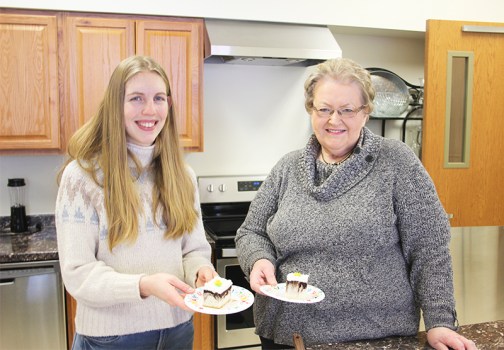 From left, Erin Lonneman, experience and program manager, and Mary Ann Atchison, a board member at the Freeborn County Historical Museum, are ready to hand out cake during the museum's 75th anniversary celebration on Friday. Alex Guerrero/Albert Lea Tribune 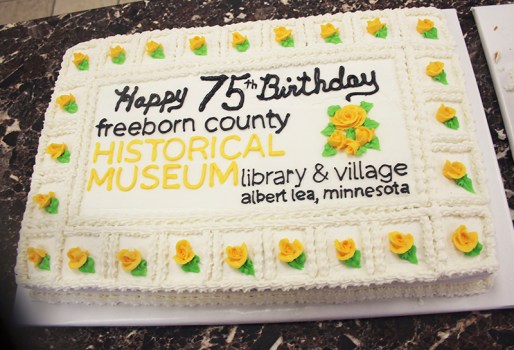 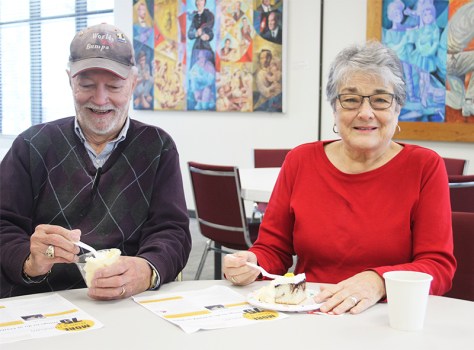 The Freeborn County Historical Museum, Library and Village threw a birthday party Friday, as it celebrated 75 years since it was founded.

“Why wouldn’t we celebrate 75 years?” said Stephanie Kibler. executive director of FCHMLV. “Seventy-five is kind of a milestone typically for people.”
And because the last two years COVID was still a serious deterrent, Kibler thought now was as good a time as any.

“We have a full staff here for the first time in probably five years, so got a lot to celebrate,” she said.

Anyone was invited in accordance with the museum’s goal to be a partner of the community.

“We don’t want to be seen as an exclusive place where you just come and walk through the museum and have to be members,” she said. “We want the community to know that we’re here offering programming for everybody that lives here.”

According to Kibler, this was the first time the museum threw itself a birthday party, though preparations for the party were a year in the making.

As is traditional for birthdays, cake and punch were served. Besides that, visitors could walk through the exhibits free of charge.

“We’re hoping that if somebody has feedback or if there’s a particular exhibit or program they might be interested in that they’ll share that with us,” she said.

They were also promoting their “75+ Things to do at FCHM in 2023,” and hoped the event would draw in more members.

Kibler said she’d be happy if 10 showed up to the party, and said if 50 people came they “would be thrilled.”

Above all, she wanted people to come to gain an appreciation for what happened there, whether it was for toddlers, elementary students or anyone young at heart.

“I think what the museum … [encourages] is life-long learning, which is so important to communities,” she said. “Statistics show that people who are vested in the history of their community, those communities tend to be healthier communities.”

Janice Thompson, who had been to the museum before, came from Wells with flowers.

“The place is very nice,” she said.

Jim Munyer, who is on the board of directors at the museum, believed it was the first time there was a birthday party for the organization.

“I think this is a terrific way to start off a monumental year and the history of the museum and getting it started, getting off on the right footing,” he said.

The museum also has new programming this year, including Shakespeare in the Park in August, Night at the Museum March 31 and the return of the Uncorking History series April 14. Staple programming for the new year will include Autumn in the Village Sept. 16 and the popular meatball supper Feb. 24.

“Uncorking History, we pick a case from the past, typically 1800s or early 1900s, and we have a couple attorneys and a judge,” Kibler said. “They try the case in front of an audience. The audience then becomes the jury and they deliberate and give their current opinion. And then we share what the outcome of the case actually was.”

And they’re starting a book club.

“Honestly, I feel like we have something for everybody on our programming schedule this year,” Kibler said.