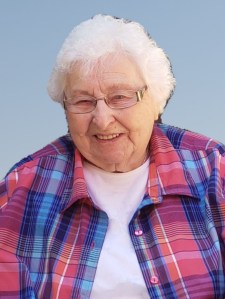 Erma was a helpmate to her husband. She was a member of St. Paul Lutheran Church in Conger where she taught Sunday School, was a member of WELCA, and held several offices for WELCA.

Erma loved gardening, sewing, and quilting. She loved and took great interest in the family genealogy. She also was a volunteer at St. John’s and held an office in the auxiliary and helped with the serving of Aebleskivers for several years.

Erma was preceded in death by her husband, Russell; her parents, and her parents-in-law, also brothers-in-laws and sisters-in-law.

Services will be planned for Saturday, June 3rd, 2023.

A special thanks to the staff at Knutson Place and St John’s.

In lieu of flowers, any memorial gifts can be made to Knutson Place.