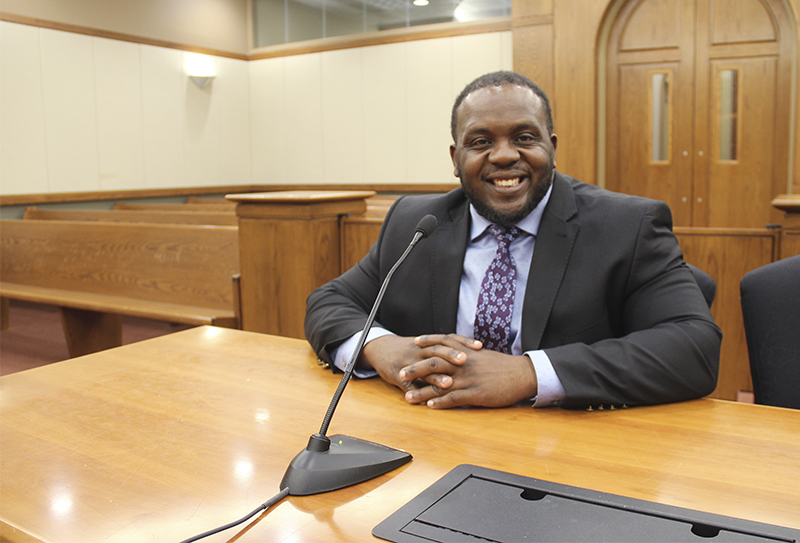 Gregory Jones will be the first to tell you he came from rough beginnings.

His father had challenges with drug abuse, and his mother raised him and his three siblings on a meager income.

Jones, a new assistant Freeborn County attorney, said he prides himself in the Gestalt theory, which emphasizes that the whole of anything is greater than its individual parts.

Instead of letting those situations define him, he decided he was going to use those life experiences to learn from and become a better person.

While working as a salesman for DirecTV, he said he realized that though he was making good money, it wasn’t something he wanted to do for the rest of his life. And that’s when he decided to vigorously pursue law school.

Jones said he earned his undergraduate degree from Xavier University of Louisiana in New Orleans and his law degree from Tulane University Law School, also in New Orleans, while working as a substitute teacher, which he said gave him the flexibility to study for the bar exam and ultimately pass it.

After passing the bar exam, his first job as a lawyer was as assistant city attorney for the city of Bemidji before he started in Freeborn County in November.

Jones said one of the reasons he was attracted to the job with the Freeborn County Attorney’s Office was because he wanted to be in a smaller town but still be close enough to things happening in bigger cities.

He said while he enjoyed Bemidji, he thought it was too far away from other things. Albert Lea, on the other hand, is only an hour and a half away from Minneapolis and St. Paul, an hour from Rochester and is even closer to Austin and Owatonna.

Thus far in his new position in the County Attorney’s Office, Jones said he has enjoyed the job and has particularly enjoyed learning from others in his department, including the four other attorneys, as well as the staff who work more behind the scenes. He works specifically in the area of juvenile law and child protection.
Jones described Freeborn County Attorney David Walker as a teacher who always makes time to hear what he has to say and who is always looking for an opportunity to teach and help him move forward. He said he has also been grateful to work alongside Assistant County Attorney Erin O’Brien, who is a veteran working with juvenile cases.

“I’m learning from everybody around me — even the support staff,” he said.

He said he brings a unique perspective to the position given his life experiences.

Walker said the County Attorney’s Office is delighted to welcome Jones to their office.

“He brings the fresh perspective of a young, new attorney with a voracious appetite to learn,” he said.

Jones said Albert Lea is a nice community, and it has everything he needs.

Outside of work, he enjoys music, playing basketball and working out at the gym.