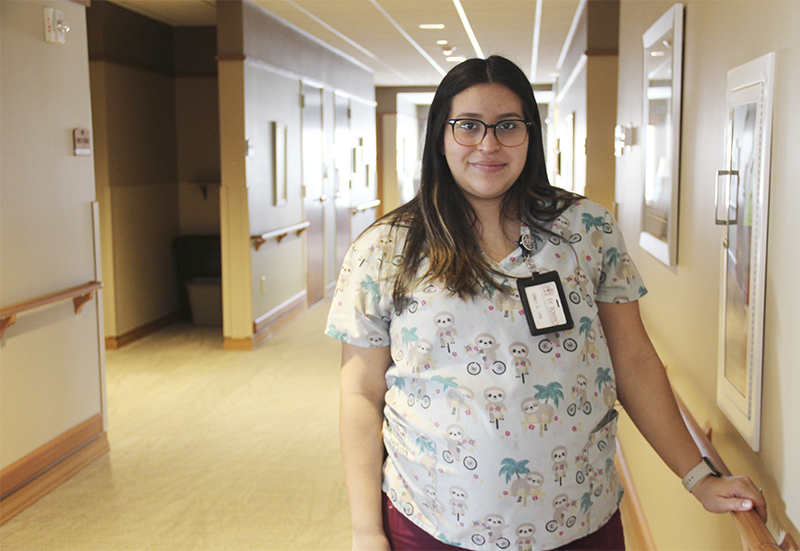 Employee starts in the dietary department, works way up to LPN

Little by little over the years, Albert Lean Emily Garibay has grown in her responsibilities at St. John’s Lutheran Community.

When she started six years ago at the age of 18, she worked in the dietary department at the organization’s campus off of Minnesota Highway 13, which oversees food for residents.

She estimated about a year or two after that, she became a certified nursing assistant and then about a month ago she became a licensed practical nurse after passing her National Council Licensure Examination.

She said she took the test on her birthday and found out she passed the following day. She got her diploma from Riverland Community College.
She presently works at The Woodlands, the skilled nursing facility on St. John’s Fountain Lake campus.

As an LPN at St. John’s, she said she does everything from passing medication and bandaging wounds to installing catheters, changing a resident or monitoring residents when certain illnesses come up.

“Now it’s their health and their life in your hands,” she said.

Garibay said she decided to become a nurse at the encouragement of her sister and a co-worker, Christina Cibert, who she described as her “work mom” from the dietary department, who is a cook at the Luther Place site.

Garibay said Cibert told her she remembered when Garibay was 18 and she wanted so much to go to school to get out of the kitchen. Cibert was always there motivating her and encouraging her to go after her goal.

She said she is proud of achieving her goal and that she loves working at St. John’s and getting to know the residents.

“It’s my home,” Garibay said of the organization. “No matter how many times I leave this place to work elsewhere, I always come home.”

Kathy Woodside, director of marketing and public relations at St. John’s said Garibay is hardworking and a positive asset to St. John’s.

“We are proud of Emily becoming an LPN and for choosing to serve seniors at St. John’s Lutheran Community,” Woodside said.