In the face of relentless breaking news cycles, it’s often difficult to step back and reflect on the big stuff. As we take stock at the beginning of 2023, the last two years of legislating in Washington have been the most productive in decades, to the great benefit of Minnesota. 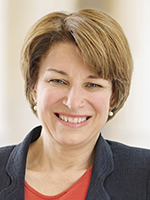 After talking for decades, we passed a transformational infrastructure plan to modernize water systems, broadband internet, roads and bridges. We passed a landmark gun safety law and a new law that’s already boosting our global competitiveness and bringing manufacturing home to America. We secured the pensions of hard working Teamsters, and we passed the most important expansion of veterans’ health care benefits in a generation for veterans exposed to toxic burn pits and radioactive waste.

And late this summer, Democrats passed the Inflation Reduction Act, the most significant action ever to combat climate change and lower energy and health care costs for Americans.

This is a huge deal for clean power and climate action. Thanks to the Inflation Reduction Act, utilities like Minnesota Power will have new help to reach their goal of generating 100% of their power from clean sources while keeping energy rates affordable. We jumpstarted the expansion of Minnesota companies like Heliene to manufacture solar panels here in the U.S. And we super charged domestic manufacturing of battery storage, clean cars and buses, and the new technology for the clean energy transition here in the United States, which will create good-paying union jobs.

The Inflation Reduction Act will save Minnesota families hundreds of dollars a year in energy bills and improve air quality. Plus, it makes us far less dependent on autocratic countries like China, Venezuela, Saudi Arabia and Russia for the energy we need. No foreign dictator can control when the sun shines or the wind blows — that’s true energy independence.

The impact of the Inflation Reduction Act is just as significant for health care. It lowers health care premiums for over 70,000 Minnesotans, and caps out of pocket prescription drug costs for seniors at $2,000 a year. If you get your health insurance through Medicare, you won’t pay more than $35 a month for insulin.

We pay for this by making sure that billion-dollar corporations pay at least a minimum in federal income taxes, and by finally allowing Medicare to negotiate directly with big drug companies for better prices for you. In fact, this law lowers the federal deficit by nearly $240 billion over the next decade.

The best part is that Minnesotans are already seeing the results of this work. We’ve jumpstarted projects across our state to replace outdated utilities systems, expand broadband, build electric vehicle charging stations and rebuild roads and bridges. Our efforts in Washington fueled the innovative work of Governor Walz to train over 1,300 nursing assistants and fill some of the most in-demand health care jobs.

And tribes across Minnesota have benefited from historic investments to build affordable housing, expand high speed internet and boost economic development. I’m particularly proud of passing my bipartisan legislation that empowers tribes to prosecute trafficking and abuse of Native children and adults.

Finally, I helped lead the enactment of a new law establishing Juneteenth as a federal holiday, recognizing the emancipation of enslaved people in our country.

It has been a productive two years in the face of significant challenges for Minnesota families. I’m optimistic about continuing our work together. This year, it will be even more important to find common ground, and one area where I believe that is possible is housing.

As chair of the Senate Subcommittee on Housing, Transportation and Community Development, I’ll be working to improve access to housing, especially in rural and tribal communities. On the Senate Agriculture Committee, I’ll be working with stakeholders in Minnesota to pass the strongest possible Farm Bill, which is one of our biggest opportunities to work on issues like nutrition, conservation, forestry and rural development.

We’ve done a lot this year to help families, small businesses and communities in Minnesota get back on their feet. As we enter 2023, I’m confident Minnesota and the nation will see the benefits of our work.