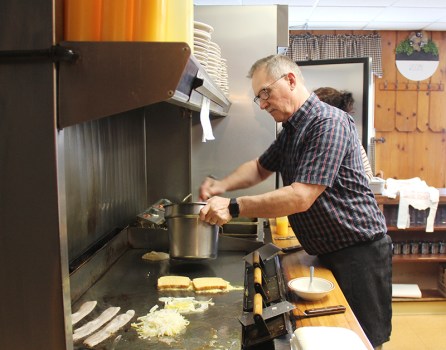 Clint Miller, co-owner of B&B Cafe, cooks Friday morning at the restaurant. Miller said the rising costs of eggs and other foods have caused them to recently raise their prices. Sarah Stultz/Albert Lea Tribune 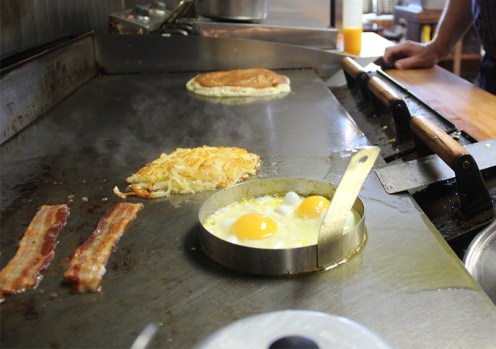 Eggs, hashbrowns, bacon and a pancake cook on the griddle Friday at the restaurant. Sarah Stultz/Albert Lea Tribune 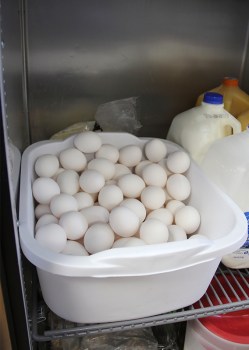 Consumers aren’t the only ones feeling the effects from rising egg prices.

Restaurants that specialize in serving breakfast are particularly feeling the crunch.

“It’s tough, we had to increase our prices a little bit because of it,” said Clint Miller, co-owner of the B&B Cafe in Albert Lea. “We try to average things out, but eggs are a big part of our business — the pancakes, french toast and then the egg breakfasts.”

At this time of year, the B&B Cafe goes through roughly four to five cases of eggs a week, he said, while in the summer that number is more like six or seven cases a week as people are out and about more.

This week the cafe rolled out new prices to make up for the rising prices on the front end.

According to the Associated Press, the increases in the prices of eggs are the result of the lingering bird flu outbreak, combined with soaring feed, fuel and labor costs.

More than 43 million of the 58 million birds slaughtered over the past year to control the virus have been egg-laying chickens, including some farms with more than a million birds apiece in major egg-producing states like Iowa.

Jada Thomson, a University of Arkansas agricultural economist, said there may be some relief coming in egg prices in the next couple months because egg farmers have been steadily replacing their flocks lost to bird flu last year and demand will ease a bit now that people are done with their holiday baking.

But Miller says eggs aren’t the only costs they are seeing rise — and some things they are struggling even to get at all.

“Strawberry jelly especially we could not get for quite a while,” he said. “Now we’re OK. Cooking oil that we use, we struggled with that. It’s just different things you just can’t get. I guess it’s just like everything else. It’s not only eggs we’ve seen.”

He said a can of mushrooms they use for their covered eggs, for example, has more than doubled.

“So I guess you just have to change prices to keep up,” said Miller, who has had the cafe with his wife, Holly, for 20 years.

He said customers for the most part have been accepting of the rise in costs, though he has had some conversations about it with others who have questioned it. He noted at the peak prices, a single egg was 50 cents.

Nancy Newman, owner of Nancy’s Cafe, said the increased prices have also been difficult for her business.

“It’s been really hard on us — big time,” Newman said. “We can’t raise our prices every time prices go up.”

— The Associated Press contributed to this article.