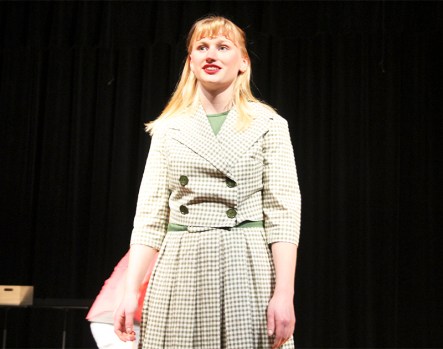 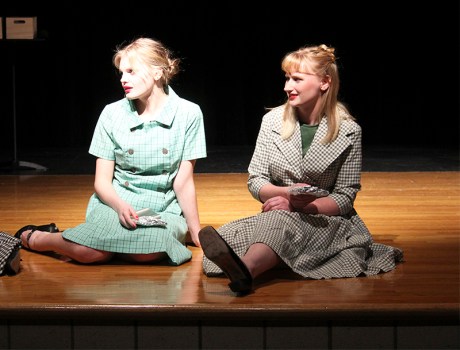 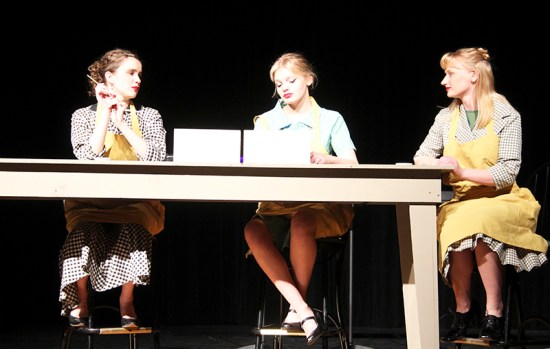 Students rehearse a scene from the factory where they make watches during a Monday rehearsal. Alex Guerrero/Albert Lea Tribune

Albert Lea High School students are getting ready for another play, as they prepare three shows of “These Shining Lives,” a competitive one-act play.

“‘These Shining Lives” is a take on ‘Radium Girls’ story,” said Abby Weidner, Southwest Middle School English teacher and director of the one-act show. “Radium Dial Co., back in 1920, used to have women paint watches with a radium compound, which they did not know was poisonous until much later.”

The story is about Catherine Donohue and her work at the company from her start to eventual death from radium poisoning.

“I really loved the historical significance of it,” she said. “I think it’s important to shine a light on a lot of women who did not get their credit for doing so much for a company before they died because of the company.”

According to Weidner, what separates this play from the traditional spring play is that they will be competing against other schools, each school is limited to 20 people and can’t be longer than 35 minutes.

Auditions were held in the middle of December.

There are 18 people in the play, including cast and crew. Weidner said unlike with the musical or play, strong acting and strong sets were important because if they didn’t they wouldn’t move on.

“The competition aspect really changes the level we have to be at,” she said.

And while she hopes students enjoy the competitive aspect of the play, she wants students considering a career in performing arts to have fun, learn who they are and how they can best perform while growing in their craft.

“I personally have been doing theater since middle school, high school and college,” she said. “I applied last year when I first got a job in the district.”

“My character Catherine is a worker for the Radium Dial Co. who paints watches and ends up becoming very sick,” she said.

Maiden loves theater, music and performing, and knew she wanted to do this after serving as stage manager for last year’s one-act.

Ava Cunningham, a senior, plays Frances, another of the Radium girls.

“She is a little sassy and possibly even off-putting,” she said. “She has a little bit of an attitude.”

Cunningham said she thought she needed something to do over the winter, but decided not to compete in mock trial this year, and she had done one-act plays as a freshman and junior.

She was also appreciative that she could test out different character types and could change what she did.

Al Bierman is an eighth grader and aspiring actor who plays Mr. Reed.

“He tells [the Radium girls] what to do and he tries to be confident, but there are some parts of the play where he’s just anxious about something. He tries to get over it, act all tough.”

He decided to try out after receiving encouragement from his role in “Beauty and the Beast,” where he worked in the crew.

“Everybody on the stage really made me want to try it for myself,” he said.

This will be Weidner’s second one-act at the high school, though she participated every year while in high school.

“I thought it was the greatest experience ever,” she said. “I learned so much about not only having to compete against people in something that I love, but I really grew a lot of strengths cause I figured out what I’m good at, what I need to improve, stuff like that.”

She also enjoys the competitive aspect of the play while seeing students create something uniquely their own.

Students will perform twice at the middle school during school hours, once for sixth grade and the other for seventh grade.

They will perform again at 7 p.m. Tuesday at the high school. That show is free and open to the public, with doors opening at 6:30 p.m.

They will start performing competitively Friday against four other schools at Lakeville South High School in subsections. If they win, they will move on to sectionals, and should they win again they’ll compete in the state competition at St. Catherine University in St. Paul.