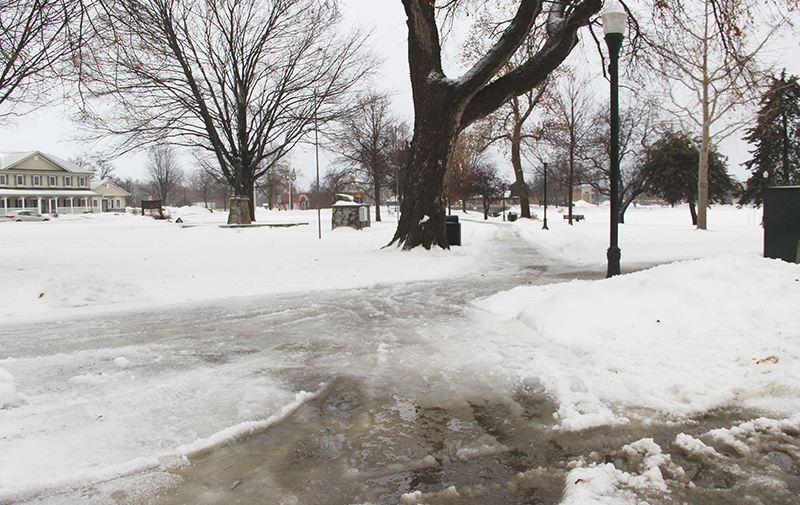 Many roads in Albert Lea will slushy Tuesday afternoon after a period of rain and even some thundersnow. Sarah Stultz/Albert Lea Tribune

City asking for help to clear drains to prevent flooding

Area residents awoke Tuesday to a layer of ice on trees and vehicles and throughout the day experienced everything from freezing drizzle, snow and rain to even the more rare thundersnow.

Temperatures hovered above freezing for much of the day, keeping the ice melted, though there was likelihood that the slushy roads would freeze again overnight.

All area schools that were back in operation after the holidays were canceled Tuesday, and several crashes were reported.

One crash, at 10:47 a.m. Tuesday injured Naser Mojtabaei Pour, 39, of Fort Worth, Texas, who was driving a 2021 Freightliner semi northbound on Interstate 35 near Clarks Grove. Pour reportedly lost control of the semi and went into the ditch.

In addition to slippery conditions, with rain falling on the area and lots of snow still covering boulevards, some streets in Albert Lea saw some standing water.

By preventing ice dams from blocking the drains, stormwater will continue to drain off the streets instead of ponding that can lead to hazardous conditions, the city stated.

Albert Lea remains under a winter weather advisory through Wednesday night with snow and freezing drizzle possible before 2 p.m. New ice accumulation of one-tenth of an inch is possible.

The chance for precipitation lifts after Wednesday with mostly sunny skies on Friday and Saturday with slightly colder temperatures.