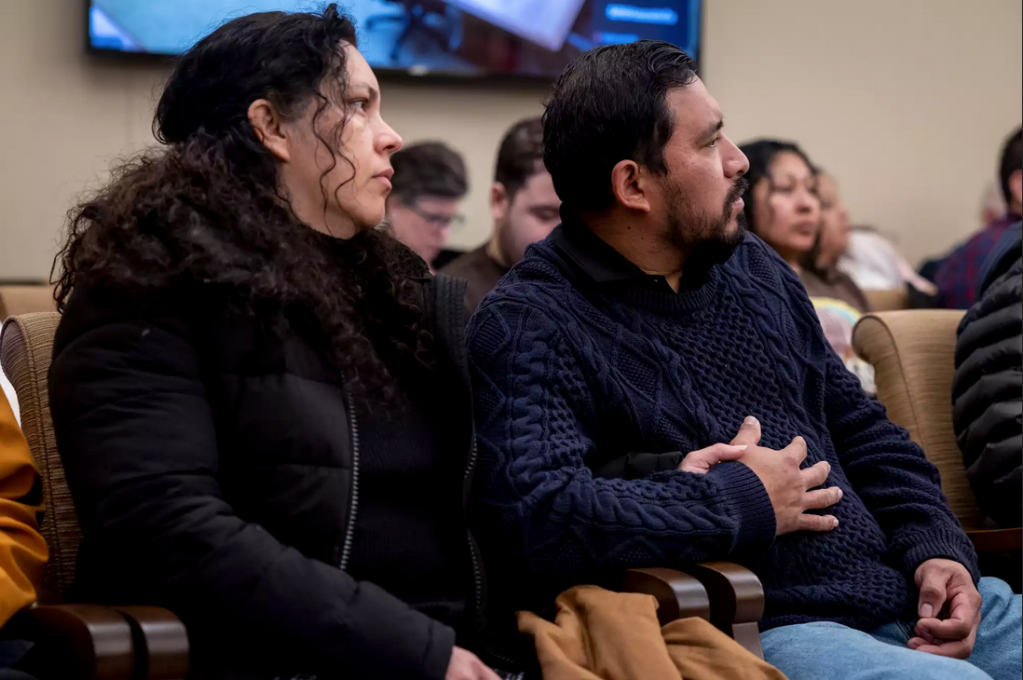 One by one Tuesday, Minnesotans who are in the country without authorization sat before lawmakers and shared stories about how the law preventing them from getting a driver’s license had affected them.

They shared their fear about getting pulled over by police and deported, frustrations about their inability to get to work, take kids to school or make it to a medical appointment and anxiety about getting behind the wheel without a state-issued ID.

And they implored lawmakers to pass a bill that would let them sign up for a driver’s license in Minnesota.

“There are so many problems that our community faces and I am asking you to help us in one,” said Claudia Garcia, of Northfield. “Pass House File 4 so that kids’ parents can drive them legally and safely without fear that it could rip a family apart.”

It was the bill’s first airing of the 2023 legislative session and late Tuesday evening, the House Transportation Committee approved it on a voice vote.

A broad swath of immigration, faith, business, agriculture and public safety groups spoke in favor of the bill, saying it would help undocumented people, boost the economy and improve safety on Minnesota roadways. No members of the public stood to oppose it during the almost three hours of testimony.

“This bill is really about the tens of thousands of individuals and families who lack access to this basic need — a driver’s license —  so that they can safely and lawfully get to work, to medical appointments, they can transport their kids to school and activities,” the bill’s author Rep. Aisha Gomez, DFL-Minneapolis, said. “This bill is about the safety of everyone who drives on our roads.”

Republicans on the panel raised concerns about creating a driver’s license for unauthorized immigrants that would look like any other license. And they worried that it could be used to vote, even though non-citizens aren’t legally able to do so.

“I really am concerned about the fact that I don’t think we have provided enough guardrails on it for abuse,” Rep. John Petersburg, R-Waseca, said. “I just don’t think we’ve given true importance to the potential abuses of it.”

Some also said they worried that allowing people without documentation to receive a driver’s license could discourage them from going through the citizenship process.

The measure is likely to face that argument and others as it speeds through the Capitol in the days ahead. Gov. Tim Walz, a Democrat, has said he will sign it into law once it reaches his desk.

Prior to 2003, Minnesotans could obtain a driver’s license no matter their immigration status as long as they completed the appropriate knowledge and road tests. But then-Gov. Tim Pawlenty that year prohibited people in the country illegally from obtaining licenses, citing concerns about security in the wake of the September 11 attacks.

In the nearly two decades since Minnesota changed its driver’s license policy, immigrants, faith leaders and business groups have pressed lawmakers to re-write the law. But no matter the political makeup of the Legislature, they’ve come up short.

Eighteen states including the District of Columbia and Puerto Rico allow residents to obain driver’s licenses, regardless of immigration status.

In states with similar laws on the books, reports of unauthorized immigrants casting ballots are exceedingly rare. An estimated 81,000 Minnesotans lacking permanent legal status here could become eligible to apply and test to receive a license.

The dozens of people who came before the committee Tuesday said they just wanted to legally be able to drive to work or school or the grocery store.

“Our community needs you to help us to obtain this identification that is so indispensable,” Rochester Pastor Benjamín Vanegas told lawmakers through a translator. “I ask you please not to leave us in limbo. It’s necessary to obtain an ID.”

Alejandra Chavez Rivas, a DACA recipient, said she lost her license when her DACA status was waived while she was in college. And she had to drive without a license to get to school and take her child to daycare, she said.

“I was a student, I was a single mother driving my daughter from Monticello to St. Paul, also driving myself to school every single day and it paralyzed me,” Chavez Rivas said. “I was in fear of getting deported. I was in fear of graduating. I didn’t know what the future held for me.”

Stearns County Sheriff Steve Soyka said in areas like his with a heavy presence of farm and food operations, migrant workers are more common. And they should be able to have the option to test and receive their driver’s licenses, he said.

“The reality is that a majority of these parties are probably driving anyways for work purposes and to have them properly licensed with proper training just increases the safety for everyone involved,” Soyka said.