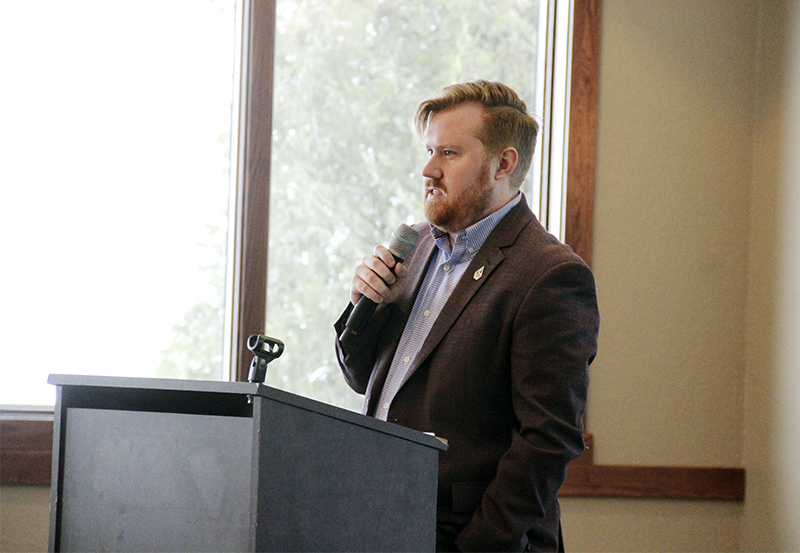 Albert Lea’s economic development officials are working on numerous opportunities for growth that could come to fruition in 2023 or the next few years, according to the Albert Lea Economic Development Agency executive director in his report Wednesday at the annual Greater Jobs Inc. meeting at Wedgewood Cove Golf Club.

Phillip Johnson, who has been in the position since 2019, referenced potential new quick-service restaurants and retail opportunities, a new hotel, development downtown and work toward a new grocer.

His organization is also working with a steel company, a biodegradable plastics group, a bait shop, a large industrial business, a biogas company, breweries, a pharmaceuticals company, and a heating and plumbing business. Four existing businesses are also looking to expand.

He thanked the partners in the community who help make the growth possible and who continue to support the efforts.

“I think in a town such as this, especially, considering our size, if we’re not working collaboratively, then we’re not going to be successful,” Johnson said. “I think we have to continue to do that … and just move projects forward.”

Johnson said north Bridge Avenue is expected to continue to be one of the areas of highest new development. He said he is working with a major retailer in that part of town, as well as a new hotel, which is finalizing between two different locations with hopes to break ground between spring and fall. If that hotel location goes well, there could potentially be another one closer to downtown as well. There is also interest from two or three quick-service restaurants.

Johnson described the differences on the north part of Bridge Avenue from when he first moved to the community to now and talked about benefits the new road construction has brought and will continue to bring to the city.

Regarding a new grocer, Johnson said there have been two groups interested in bringing a new grocery store to the community with the interest focusing on the Blazing Star Landing — the former Wilson & Co. site.

Once the environmental studies are completed on that land, he will have more detailed conversations with those grocers with hopes of getting onto the schedule for one likely in 2025.

Greater Jobs has nine tenants that occupy a total of about 262,000 square feet of space. He said the organization’s space is completely full with the exception of some minor space at the Albert Lea Business Development Center.

Johnson said the organization presently has 15 loans in place to companies totaling $936,000 with about $400,000 left in its loan pool. He said the loans have been successful, and he wanted to promote them more.

A highlight from 2022 has been the launch of a new gap scholarship program for high school graduates in Freeborn County who want to attend Riverland Community College. ALEDA and its partners have raised between $150,000 and $160,000 a year for the next five years for the program and are reaching out to businesses to seek additional funds.

In addition to the scholarship program, he wants to try to discuss developing education programs locally that focus on the key areas where local employers need to recruit workers, or that focus on the kinds of work the community would like to attract.

He talked about continued work on expanding child care opportunities in the community as well as housing.

Johnson said the new Front Street Apartments were filled quickly once completed, and the developer is beginning the second and third phases of the project. The apartments in the former Marketplace Foods building should be complete by the end of the year.

In 2022, a community investment fund was also formed and so far has around 25 investors. He expected more would be released about this in the coming months but noted that one of the areas it would like to focus on is the 300 block of Broadway, which he said has struggled for decades.

Some of the other things he would like to work on in 2023 include developing more warehousing in the community. He will continue to work with the Regenerative Agriculture Alliance, which wants Albert Lea to be its regional hub.

Johnson said the organization is working closely with the new owners of the former Streater building to fill the building and noted that four businesses are currently in the space.

The meeting also included affirmation of board members, a report of financial statements and an update on the C.E. Myers Scholarship.