Mentoring: A way to be involved with local youth 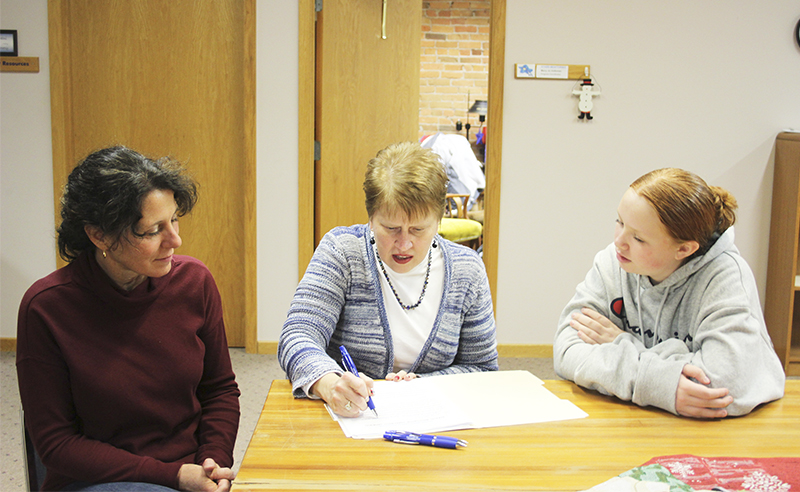 From left, Nicole Eckstrom, Mary Jo Volkman and Lily Hammann go over a contract renewal for the next year in which Eckstrom will serve as Hammann's mentor for 2023. Alex Guerrero/Albert Lea Tribune

January is National Mentoring Month, and according to Mary Jo Volkman, program coordinator with Success Through Adults Reaching Students, it has been around since 2001.

“It is an annual campaign to focus attention on the needs for mentors as well as how each of us can work together to increase the number of mentors to help ensure positive outcomes for our young people ,” she said. “It’s just a great big push to tell about our program.”

Volkman described the organization as a mentoring program that provided mentors for at-risk children and wanted to help them make positive life choices and develop to their potential. This is her 10th year as program coordinator for STARS.

Each potential connection begins when a mentor applies to the program, where Volkman will do an interview and talk about interests.

“If an adult has a lot of the same interests as a child, then I match them up to be a mentor and a mentee,” she said.

After being paired up, both the mentor and child develop a schedule and meet preferably two to four times per month, with each meeting lasting one or two hours, though Volkman said usually the two will meet weekly.

“The mentor might pick up the child and bring them to their house to bake cookies,” she said. “On a nice summer day they might decide to go for a bike ride or a walk in the park.”

The two could do crafting, play games or go to the library, and Volkman emphasized STARS tried to make use of community resources.

Volkman described the program as a success, and said students involved in it “really enjoyed it,” particularly group events such as ice skating, swimming, bingo and crafts events.

Nicole Eckstrom started as a mentor back in 2021 after being approached by Linda Lares.

“My children had gotten to an age where I wasn’t volunteering in the schools as much as I had previously been,” she said. “I was looking at a way of just being involved with the local youth, and Linda Lares had mentioned the STARS mentoring program.”

So she looked into it, not knowing what to expect but wanting to do a good job.

Eckstrom admitted after having three daughters of her own, the issues her mentee, Lily Hammann, brings up are issues she had prior experience with.

The experience has taught her the importance of connecting with local youth and how important it was to be a good role model. She also admitted having integrity was key.

Hammann, a seventh-grader, first heard about STARS from her fourth-grade teacher and said so far the experience of working with Eckstrom was “really good.”

She enjoys cooking, arts and crafts and exploring the outdoors with Eckstrom.

“I feel like Lily is maybe more confident, more willing to try new experiences,” Eckstrom said. “I try to find new activities to do that maybe Lily wouldn’t do on a normal day-to-day basis.”

“It really helps you to learn about life, and helps you get to know people better,” Hamman said.

And that’s what the program is about, teaching life skills.

“We help with decision-making, conflict resolution and helping with their self-confidence,” Volkman said.

At the end of the month there will be a national mentoring summit in Washington, D.C.

According to Volkman, STARS was founded by citizens of the United South Central School District as a way to provide community-based mentoring to youth in order to prevent risky youth behaviors. In 2005 STARS assumed responsibility for Community Mentor Connection, a youth mentoring program in Freeborn County that had been in operation since 1997 with help from the Family Services Collaborative after the Freeborn County Department of Human Services could no longer fund the program. STARS has been in Albert Lea since 2012 and serves all of Freeborn County, along with the eastern portion of Faribault County, and serves four school districts: Albert Lea Area Schools, Alden-Conger Public School, Glenville-Emmons Schools and United South Central Public Schools.

Currently there are 14 mentors for 16 students at STARS, with students ranging in age from second to 10th grades. According to Volkman, STARS had a shortage of mentors and had a waiting list for both boys and girls.

“I really struggle with that,” she said. “I go out to businesses and to community places, put up my brochure and put up my posters,” she said. “I think maybe mentors just don’t know how much of a time commitment it is.”

To apply to become a mentor, you must be at least 18, have a driver’s license and provide three references. Call Volkman at 507-383–5272 or email her at starsforkids@yahoo.com. There is also a website. You must also pass a background check. Parents or guardians interested in providing a child with a mentor should reach out to Volkman, where she’ll go out to a home for interviews with both the child and caregiver.

“I find out their interests, so that’s where the match comes in,” she said.

Each commitment is for one year, though after that time both the mentor and mentee have the option to extend it for another year, and Volkman said both tend to stick together through high school.

“I just had a closure of a mentor and a mentee, the child started in second grade and she graduated from high school,” she said. “She was with that same person , same mentor, for all those years.”