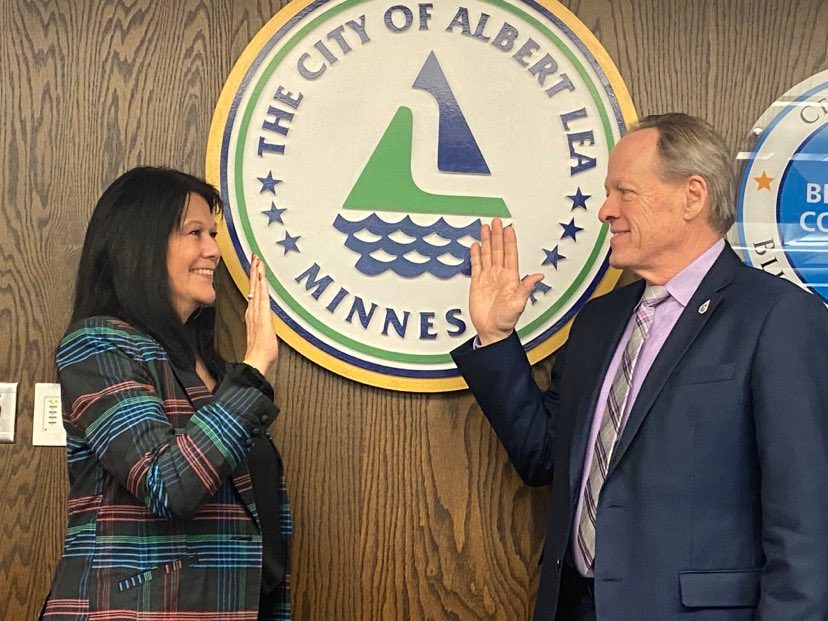 Albert Lea’s new mayor and four City Council members took the oath of office Monday in what was the first council meeting of the year.

Taking the oath of office Monday were new councilors Brian Anderson, Rachel Christensen and Sherri Rasmussen at the Albert Lea City Council meeting. Larry Baker, who was first elected in 2006, was sworn in for another term. Sarah Stultz/Albert Lea Tribune

Former 1st Ward Councilor Rich Murray will lead the city as mayor after being elected to the position in November. 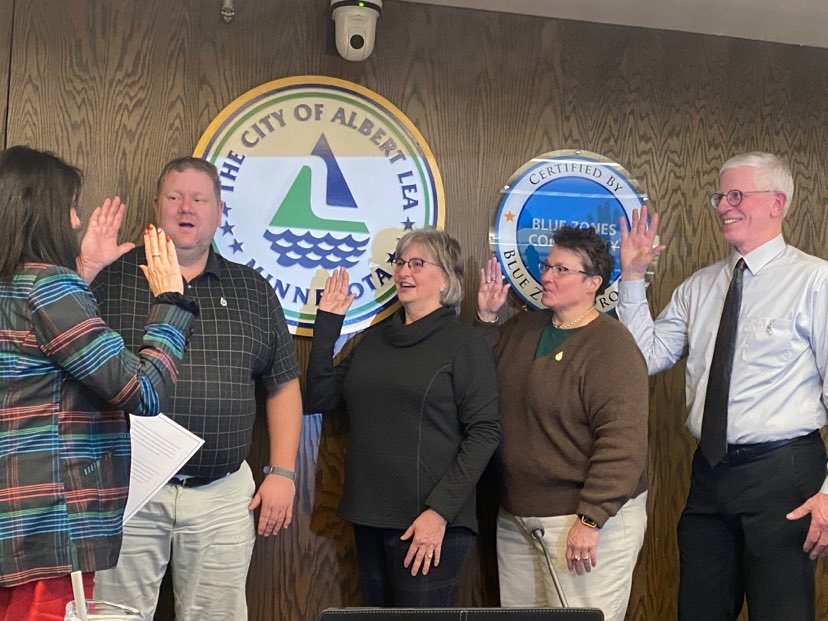 Murray has served on the council previously for six years as the 1st Ward councilor, and Baker was first elected in 2006. The other three councilors are new this year after winning their respective elections in November.

The council approved the boards that each member will serve on throughout the year as well as the rules and procedures the council will follow.

In other actions, the council:

The council also amended part of the city ordinance to change legal service for the city from a department to a contracted service.

The action came after the council last year opted to go with a firm for legal services instead of hiring a new city attorney.

• Authorized $43,250 in Broadway Ridge Renewal Grant Funding for a new roof on 113 S. Newton Ave. The grant can provide up to 50% of costs associated with roof replacement.

• Accepted a feasibility report and called a public hearing for Feb. 13 for the reconstruction of parts of Fifth Street and Frank Hall Drive.

New sidewalk is proposed on Frank Hall Drive along Academy Park and to fill the gap between Fourth and Fifth Street.

The estimated project cost is $1.64 million, and 33 properties are expected to be assessed.

• Designated depositories of city funds as US Bank, Stifel, Moreton and the Minnesota Municipal Money Market Fund and signatories for withdrawal of city funds as City Manager Ian Rigg, Murray and Baker.

• Named the official newspaper as the Albert Lea Tribune for matters required by law to be published.

• Approved a resolution with the Minnesota Department of Transportation authorizing the state to act as the local government’s agent in accepting federal funds from the Federal Highway Administration on the city’s behalf for road projects. The agreement is passed every few years.

The current system has frequent breakdowns.

The update will upgrade the fueling system to a chip card reader and replace the fuel monitoring system.

Check back for more information from the Monday meeting.