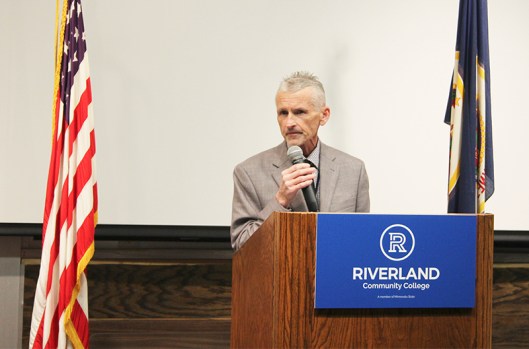 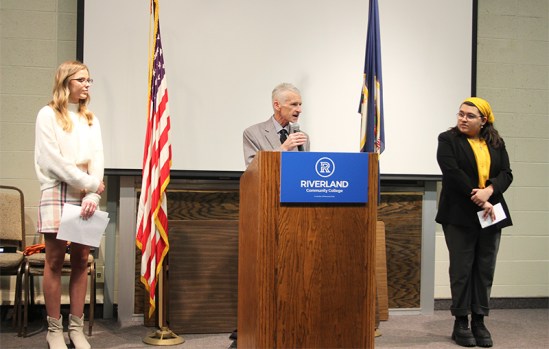 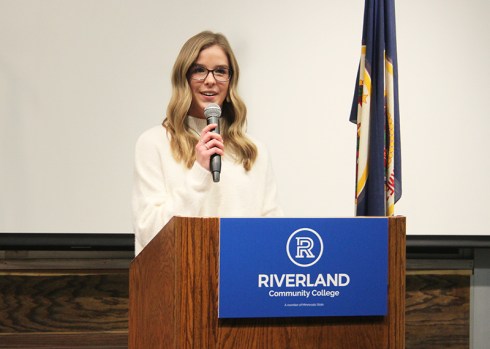 Kaitlyn Klocke is the other recipient of a scholarship awarded Monday night. Alex Guerrero/Albert Lea Tribune 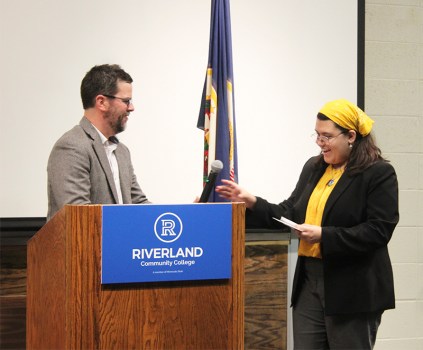 Erika Saindon accepts the microphone after being awarded a scholarship during the event from Jeremy Corey-Gruenes, a teacher at the high school. Alex Guerrero/Albert Lea Tribune 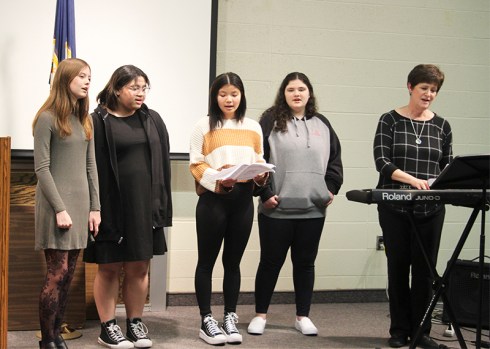 Intelligence builds character, and the goal of true education is to teach people to think intensively and critically.

That was one of Dr. Martin Luther King Jr.’s main ideas, and that was Ron Wagner’s message as keynote speaker during the 35th annual Dr. Martin Luther King Jr. celebration Monday in the lecture hall at Riverland Community College — Albert Lea campus. This year’s theme: “To ensure individual academic, social and emotional growth that leads to engaged citizens and lifelong learners” and focused on public education.

“Today is not a day off,” Wagner said in his opening remarks. “Today is a day on.”

He said it was a day in which King wouldn’t want people to stand in silence, but to partner in voice. He also emphasized the importance of the community’s greatest gift: its students.

“Education is the bedrock which we need to build Albert Lea and beyond,” he said.

He touched on King’s belief that lives began ending when people became silent over things that mattered, and said silence was saying something.

“The value that I was raised in, community and family, are threaded through the mission of Albert Lea schools as well as myself as a person,” he said.

In his 22 years in Minneapolis, he said he loved the community but felt he was never part of a family or community, but noted Albert Lea had accepted him. He also emphasized the importance of having students seen and heard daily within the classroom and hallways.

He stressed the importance that each day was met with opportunities for students.

“We cannot give today back for our students, therefore we must ensure that each day is centered around every student every day,” he said.

He touched on King’s idea of using time creatively and that the time was always right to do right.

“That time is today,” he said. “… Our global community of Albert Lea is one of beauty and offers great opportunities for us to grow in our own cultural humility and self-awareness, to insist on a community not of judgment but of acceptance.”

King also talked about hope, something Wagner noted, but said hope shouldn’t be a strategy but used as infinite possibilities and not accepting finite disappointments.

“We need to work in partnership and be that voice not to stand in silence,” he said. “We must be careful not to focus on what we can’t do, but what we must stay committed to are the actualization of our mission. At Albert Lea schools, our mission is to the academic and social/emotional growth of each student, the individual access and opportunity of each student.”

He stressed the importance of continuously asking how to infuse life skills and education in students’ journeys and to help them be visible.

“We must work in partnership to remove those barriers, the barriers that are in existence and are part of the status quo, while also learning that we cannot repeat history,” he said. “The history that Dr. King pushed against.”

And he touched on working together to create a new normal following the pandemic, one on behalf of students.

He ended his presentation with something King said, that the function of education was to teach a person to think intensively and critically.

“Intelligence builds character,” he said. “That is the goal of true education.”

Also during the program, Albert Lea High School students Sahara Hernandez, Lee Roldan, New New and Autumn Warrington sang pieces under the direction of Diane Heaney, the school’s vocal director. Erika Saindon and Kaitlyn Klocke were recognized as recipients of the Martin Luther King Jr. scholarship. The scholarships are in their 18th year, and have donated $14,000 in total.

The program began with a welcome from Rich Murray, the mayor of Albert Lea; Kim Nelson, director of career and community connections at Riverland and Albert Lea school board member; Oscar Gonzalez, dean of student affairs at Riverland; and Miguel Garate, an admissions specialist.

Last year’s presentation was postponed until February, while the 2020 celebration was held over Zoom.