Tigers claim victory over Raiders in 1st win of season 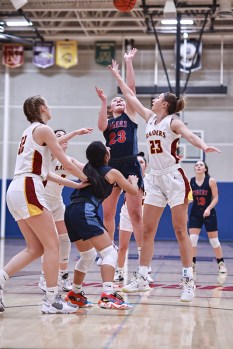 Albert Lea's Nevaeh Wacholz scores the first two points of the game and goes on to score 15 for the Tigers Tuesday night. The Tigers won 58-51 against Northfield. Photo courtesy Laura Mae Murtaugh 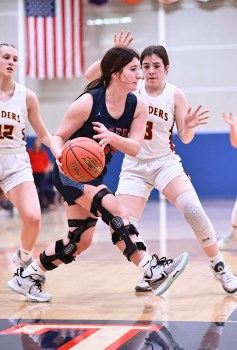 Albert Lea's Maddie VanderSyde sneaks under the basket to pass the ball to a teammate. Photo courtesy Laura Mae Murtaugh 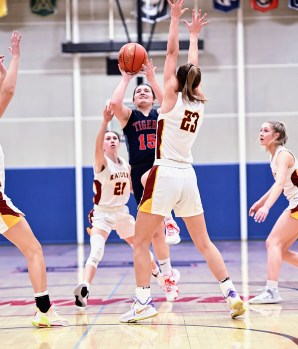 Kristina Espinosa goes up for a basket against the Northfield Raiders. Photo courtesy Laura Mae Murtaugh

Albert Lea girls basketball brought home their first win of the season against Northfield at home Tuesday night with a final score of 58-51.

Northfield came into the game at 2-5 for the season and kept the Tigers on the run up to half time, where the Tigers trailed by three points.

Senior Kristina Espinosa, however, led the team with rebounds (10) and contributed nine points to the win.

Scoring was well rounded by the Tigers with scoring also by Kayla Johnson, Lexi Jones and Maddie Vandersyde.

With even rebounding between the two teams and similar turnovers, shooting percentage was the deciding factor for the game.

Overall the Tigers shot 42% with 51% in the two-point range and 28% for three-pointers. In comparison, Northfield shot 28% overall.

The Tigers remained within three points until the final two minutes when fouls by Northfield and free throw shooting by seniors Maligaya and Kenis pulled the Tigers away to their win.

The Tigers will travel to Mankato on Thursday to take on Mankato East and will play again at home Jan. 20 against Red Wing.