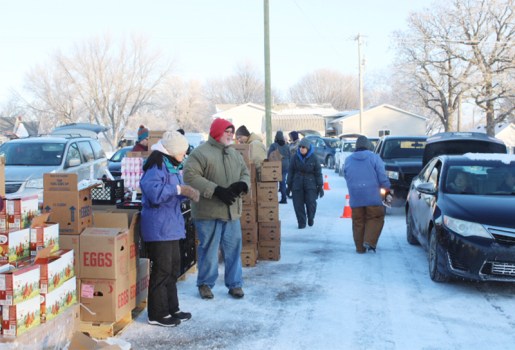 Cars come through the line at a recent Ruby's Pantry at United Methodist Church in Albert Lea. Deb Bentley/for the Tribune 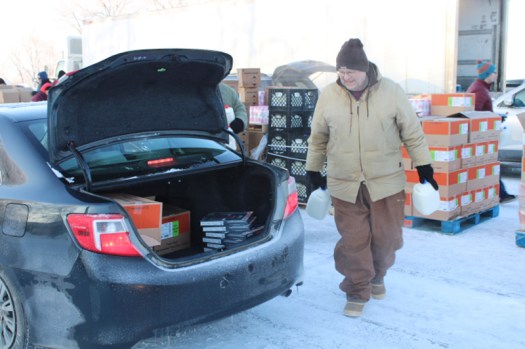 A volunteer brings milk to the trunk of a person coming through the line at Ruby's Pantry during a recent distribution. Deb Bentley/for the Tribune 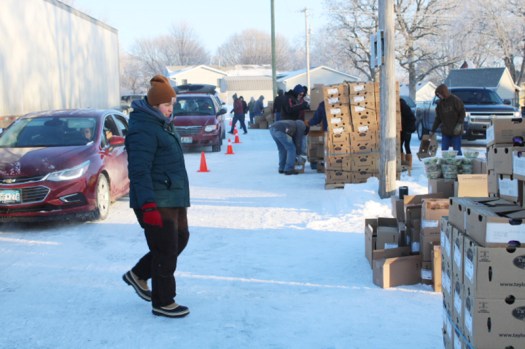 Ruby's Pantry relies on 30 to 50 volunteers locally to hand out food. Deb Bentley/for the Tribune

By Deb Bently, for the Tribune

Roughly 20 years ago, Lyn Sahr of Pine City took a pickup truck to an organization in the Twin Cities with the intent of bringing back some toys.

“I was the pastor of a church that had a mission program in Mexico four or five times a year,” Sahr remembers. “We always took toys along to help keep the children occupied while the adults took part.”

Having been told he could acquire some toys at a certain agency, he drove on down.

“Really, we didn’t know how much we didn’t know,” he says with a warm laugh. “They filled our pickup with food higher than the cab. We drove home in a daze.

“We had no idea what we were going to do with it.”

Upon getting back to Pine City, Sahr contacted an acquaintance. “Do you know anyone who needs some food?” he asked.

The friend, a real estate agent, took two boxes full and placed them on the doorstep of a young couple she knew to be struggling.

“Their world was caving in around them,” Sahr recalled. “They didn’t know where their next meal was coming from. And then two big boxes of food just arrived at their door.

“The young woman cried and hugged my friend. They stood there together, weeping.

“Then I cried when I heard about it later.”

And that was the beginning of Ruby’s Pantry, a food distribution program that collects surplus food donated by businesses and corporations, then redistributes it across 90 locations all over Minnesota, Wisconsin, North Dakota, South Dakota and Iowa.

Now centered out of North Branch, the nonprofit organization has warehouses in North Branch and Elbow Lake, and Waupauca, Wisconsin. It keeps 25 semi trucks on the road collecting and delivering food, and employs 55 people who sort and organize the donations, then pack 24 pallets with 17 to 21 different types of food items back into trucks to be delivered and distributed.

“One thing has led to another,” said Sahr, who conceived the system as he contemplated ways to continue the blessings begun on that Pine City doorstep.
The first time his church set up a distribution, he remembers, 14 people showed up. The next time there were 59; the time after that, 157. The fourth event drew more than 300.

“Word got around,” he says. “We could see it was something good, and that it should continue.”

So much so, that within a year Sahr left his position as pastor and made Ruby’s Pantry — named after his grandmother — his full-time occupation. For about 20 years, now, the program has been expanded and refined.

The organization’s website states that it distributes more than 25 million pounds of food annually that would otherwise have gone to waste while it also stretches the food dollars of more than 30,000 families a month.

The system works like this. Local organizations — mostly churches — arrange to cooperate with Ruby’s Pantry.

The local folks schedule a monthly distribution, choosing a suitable location and recruiting volunteers. Any interested households are invited to participate.

“For a $25 donation, people receive an abundance of food,” Sahr said. “There are no income requirements, and we allow up to two orders per household. We give everyone as much food as possible.”

On the selected day, a semi load of food arrives and the local group follows its own procedures to distribute the delivered items.

According to the Rev. John Mitchem, United Methodist Church in Albert Lea has sponsored a monthly Ruby’s Pantry event for the past two years.

“It’s a great way to extend the budgets and the groceries of many area families,” he said.

The church holds its drive-through delivery on the first Saturday of each month, and typically distributes about 240 household bundles. Anywhere from 30 to 50 volunteers assist.

The pallets of food, ranging from fresh vegetables to frozen cookie dough, are set in a line about 200 feet long. Visitors pay their $25 at the start, then drive slowly past while items are placed into their open trunks or car hatches.

The menu for each delivery is announced on Facebook one or two days before, soon after the Ruby’s Pantry organization shares it. Any updates regarding the event are also posted there.

The semi load of food arrives sometime around 7 a.m.

“We’re very grateful to Hanson Tires of Albert Lea,” Mitchem said. “Without the fork lift they loan us to unload the semi, we wouldn’t be able to provide the service.”

Volunteers begin arriving around 7:30 a.m. Perhaps surprisingly, Mitchem says, the majority are area residents who are not associated with the church.

“I find that gratifying,” he said. “It shows that the Albert Lea community is a caring place.”

Volunteers spend the next hour or more making necessary preparations. For example, the cans or bottles or boxes of food must often be bagged for quick delivery.

Clients for the drive-thru begin arriving about the same time as well; they are asked to create lines of vehicles in the Southwest Middle School parking lot across the street from the Methodist Church. Albert Lea police reserves volunteer their time to manage traffic flow, sending a workable number of cars at a time toward the distribution line. Though clients may arrive at 7 or earlier, distribution of the food begins about 8:45 a.m. and continues until around 10 a.m.

“We see quite a variety of clients,” Mitchem said. “Some of them are financially strapped. Others are just looking for a way to extend their budgets.

“Whatever their reason for coming, they drive away with an amazing variety of food that seems to be of fairly high quality.”

“This past time we had rather large cartons of frozen cookie dough to be baked at home,” he said. “You just never know what there will be.

“United Methodist Church is proud to be able to make this ministry available,” he said. “It’s always exciting to be out there greeting people and providing them with pleasant surprises.”