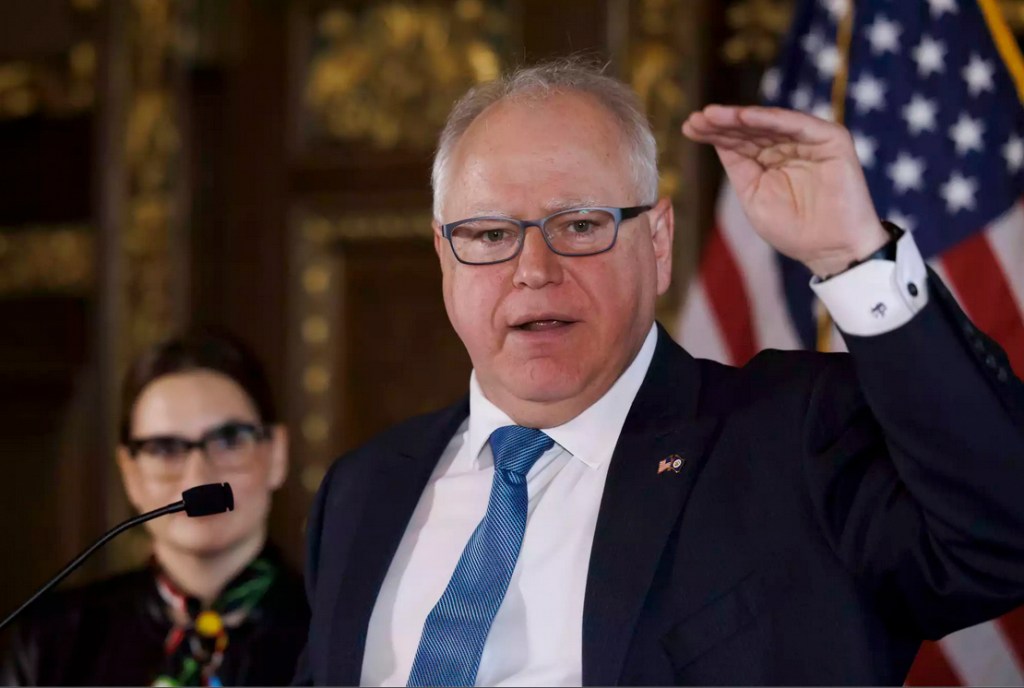 Gov. Tim Walz will propose the final elements of a state budget this week, and lawmakers will spend the rest of the legislative session debating it. Kerem Yucel/MPR News

ST. PAUL — Millions of Minnesota families would get checks totaling as much as $2,600 from the state’s huge surplus under the budget plan that Gov. Tim Walz announced Tuesday.

The direct payments are the centerpiece of an overall $65 billion two-year budget plan he unveiled Tuesday, after rolling out other proposals over the past week for increased spending on education, families, health, public safety and housing.

“This is a fair budget that will continue to create growth, reducing taxes on Minnesotans while improving all aspects of their life,” Walz said.

The checks would be structured as tax credits equal to $2,000 for families with incomes below $150,000, and $1,000 for single filers making less than $75,000. They would be exempt from federal taxes. Taxpayers could also get an additional $200 for each dependent — up to three. But those making more than the income caps would get nothing.

More than 2.5 million people in Minnesota would get the checks if lawmakers approve the plan, the administration said.

Walz’s proposed budget also includes expanded tax credits for families with children and for child care expenses. Altogether, a middle-class family of four could get $10,000 back, he said.

The Democratic governor’s budget also includes lower taxes on Social Security income for more than 350,000 households, but not a complete elimination of the tax, as Republicans and some Democratic lawmakers had hoped. Social Security recipients with high overall incomes would still owe taxes on their benefits.

Republican leaders were quick to blast the governor’s plan for its big jump in overall spending from the $54 billion in the current budget, which runs through June, and for his unwillingness to fully eliminate state taxes on Social Security at all income levels.

“We’ve got a surplus of $17.6 billion currently. This budget spends all of that. Not only that, but it grows government by 25%,” Senate Minority Leader Mark Johnson, of East Grand Forks, told reporters.

The surplus results from a combination of stronger-than-expected tax revenues and lower spending.

The governor’s budget proposal sets the stage for the main work of the 2023 legislative session. But his fellow Democrats, who now control both chambers, will have their own ideas about spending and tax priorities, and the final budget will be the product of committee hearings, floor debates and private negotiations over the next few months. An updated economic forecast expected in late February could result in adjustments. The Legislature must adjourn by May 22.

The session is already off to a fast start since it convened Jan. 3. Many top Democratic priorities are moving quickly through the legislative process, including several proposals blocked by the former GOP majority in the Senate over the last four years.

They include paid family and medical leave, legalization of recreational marijuana, climate change legislation to require that Minnesota utilities switch to carbon-free electricity by 2040 and a ban on so-called conversion therapy for LGBTQ youth.

The proposals also include funding for more prosecutors for the attorney general’s office, making driver’s licenses available regardless of immigration status, creation of an Office for Missing and Murdered Black Women and Girls, a prohibition against discrimination based on hairstyles, free school meals for all students and proposals to make voting easier, including restoring voting rights for felons when they get out of prison.

Walz signed his first bill just over a week into the session: A $100 million tax cut that brought the state tax code into conformity with federal rules.

Extended unemployment benefits for laid-off Iron Range mine workers are waiting for his signature. And the full Senate is scheduled to vote Friday on a House-passed abortion rights bill that Walz has promised to sign.