‘We can’t turn our back on our United States veterans:’ Foundation coming to Albert Lea to fix up homes for vets 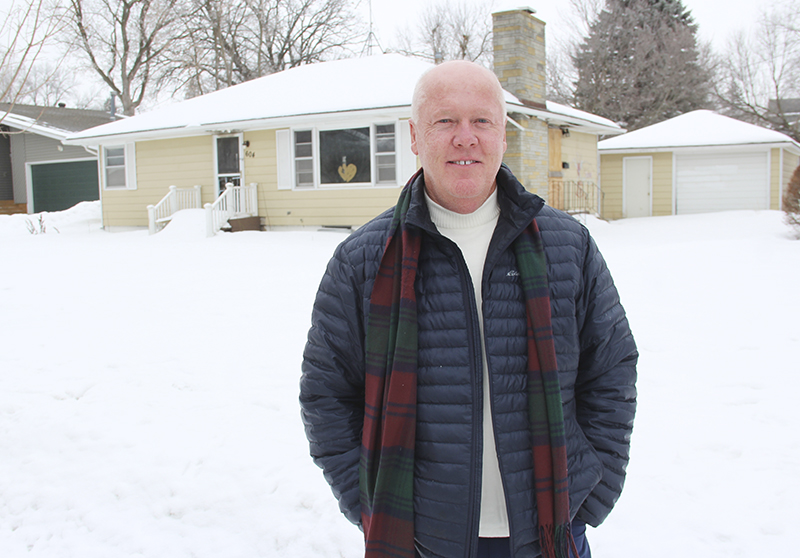 Kevin Chapman of The Chapman House Foundation is purchasing his first home in Albert Lea that will be renovated for veterans on Giles Place. Chapman said other homes are also in the works. Sarah Stultz/Albert Lea Tribune

A foundation with experience building and renovating homes for homeless veterans and veterans struggling with addictions in both Texas and North Carolina is expanding into Minnesota with its first project in the state slated for Albert Lea.

Kevin Chapman of the Chapman House Foundation is purchasing one house in Albert Lea with plans in the works for others in upcoming months.

Chapman said about a year ago, he started looking at other states to expand the foundation into, and he had come up to Minnesota previously while working with different RV dealers in the state.

“We were trying to find that perfect city, a city that we could start in a new state,” he said.

One day when he was driving on Interstate 35, he needed some gas, so he pulled over in Albert Lea and got gas at Casey’s, he said. He looked around a little in the community and noticed some taller buildings and realized those must be downtown. So he drove closer, and then he noticed Fountain Lake.

He decided to drive around the lake and then spent an hour more driving around the city.

“I was so excited I got on the phone and called a couple of our board members,” Chapman said. “I told them, ‘I’m in this town and I really like it.’”

He decided to stay overnight and did some investigation into the housing prices and crime rates in the city and said he liked what he found.

“The next day I got on the phone and said, ‘I think we found our city,’” he said. “We specifically by design want to use Albert Lea to start helping some veterans and putting up these homes. We also want to shine a big spotlight on this thing — blast it out nationwide for the purpose of if Albert Lea, Minn., can do it, maybe your city and state can do it, too.”

He said he realizes his foundation can’t do it all but hopes to influence other groups to do something similar across the country.

‘We can’t turn our back’

Chapman and his wife, Donna, previously owned a rehabilitation facility in Texas, and when they noticed several veterans using the facility, they decided to create housing for veterans.

He said they opened multiple properties there, literally helping hundreds of veterans who struggled with drug and alcohol addiction to be sober and law abiding.

“Many of these veterans, they just need a little polishing up,” he said. “Once they get well, now they’re basically a soldier again.”

About seven or eight years after completing their Texas project, they turned those properties over to another nonprofit.

“My phone was ringing off the hook asking me to come there,” he said.

He and his wife ended up in Charlotte, North Carolina, where there are a lot of veterans, he said. Many are homeless and sleeping in abandoned cars, sleeping behind Walmarts or hiding in forests.

Chapman acknowledges though he does not have all the answers, there are four elements in his life that he pays attention to every day: God, country, family and United States veterans.

“We can’t turn our back on our United States veterans,” he said.

The foundation is starting in Albert Lea with a property at 604 Giles Place. The Albert Lea City Council last week approved the development agreement and sale for the property with Chapman. The property was previously the site of a fire and the city cleared the fire debris and took the house down to the studs, Chapman said.

The house will be renovated on both the inside and outside.

Discussions are in the works for another property as well. Chapman credited City Manager Ian Rigg and staff he has worked with thus far.

He said the Giles Place property will house three veterans. Tenants of the houses will be charged $16 a day and will be overseen by a manager of sorts.

The foundation will work with local Veterans Affairs hospitals and clinics, and literature will be distributed to hospitals about the project to reach veterans and promote the opportunity.

The veterans who live in the Chapman House Foundation properties could be from Albert Lea or from outside the community. He said he has already talked to veterans in Minneapolis and even North Carolina about coming to Albert Lea, and people have expressed interest.

“I believe it’s a great opportunity for the city of Albert Lea because there’s going to be other cities, other states looking, ‘How did you guys do it up there?’” he said.

Chapman said he also looks forward to future discussions about putting up a transitional housing project in Albert Lea.

He is hopeful people in the community will wrap their support around the veterans in the houses, especially the local veterans groups, and help them feel a part of the community.

He is applying for help to renovate the houses through Home Depot, which has supported many of his projects in the past and he is hopeful will do so again. He described the company as a huge supporter of veterans. As of the end of November 2021, it had invested more than $400 million in efforts in support of U.S. military veterans since 2011.

Chapman is slated to speak about the project at 7 p.m. Jan. 28 at the Masonic Lodge in Albert Lea, which is in the upper level of the Marion Ross Performing Arts Center. He hopes people will join him and get excited about the project.

He encouraged people to reach out to him at Chapmanhouse7@gmail.com with questions or to get involved.