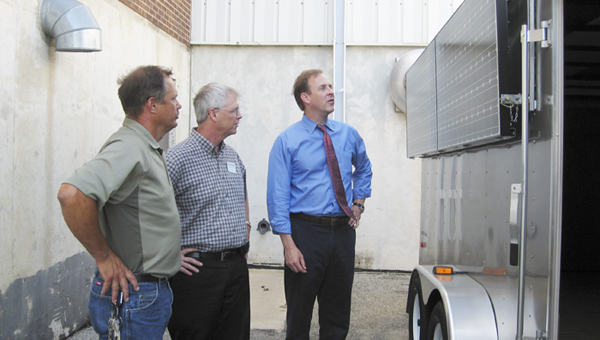 From left, Bob Bender, Steve Bowron and Matt Entenza look at a solar panel on a trailer Tuesday. Bender and Bowron are staff members of Riverland Community College and part of the solar and wind energy programs. -- Ed Shannon

Matt Entenza, DFL candidate for Minnesota governor, visited Riverland Community College Tuesday afternoon to obtain an update on the school’s new solar and wind energy program.
Briefing him on the Riverland program, which started in the fall of 2009, were Steve Bowron, dean for institutional development, and Bob Bender, industrial maintenance instructor.
“We’re on the front end of this program,” Bowron declared. He cited the  development of the Bent Tree Wind Farm northwest of Albert Lea and the future construction of a small-scale wind turbine on the east side of Riverland campus later this fall as incentives for the local programs.
He added that 12 of the college’s first year students are now interning in the region’s alternative energy industry.
Entenza said he has spent the last several days visiting places with new sources of energy in rural Minnesota.
“We can create a billion dollar industry in southeast Minnesota. Wind can compete with coal,” Entenza declared.
“Albert Lea can also take advantage of being a rail and highway transportation hub,” he added.
During his visit, Entenza visited the training trailer with its solar panel and the college’s new wind and solar energy laboratory.
“You are developing a future workforce for alternative energy,” Entenza commented about the Riverland program.