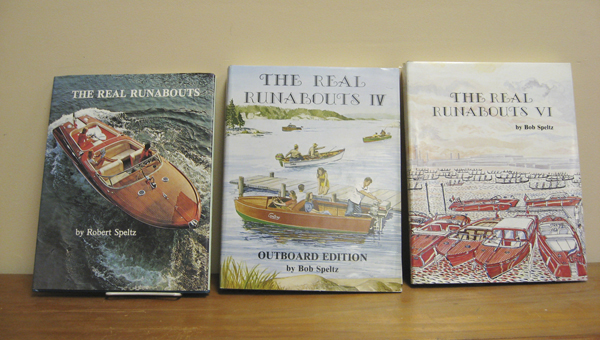 Here are three of the seven hardcover books in “The Real Runabouts” series written by Bob Speltz of Albert Lea. The book on the left, Volume One, was issued in 1977. Speltz also created two softcover books, several videos, full-color posters and T-shirt transfers based on antique and classic boat topics. -- Ed Shannon

Editor’s note: This is the last of a three-part series.

When his chosen career of being a teacher was changed by a kidney condition, Robert G. Speltz returned to Albert Lea to start a dialysis routine three times a week. And it’s at this point in his life that he made the decision to devote his activities towards wooden boats in general and the type called runabouts in particular.

His intensive research and contacts with boat makers, other owners and enthusiasts in the U.S., Canada and even Europe resulted in the eventual creation of seven hardcover books, all with the title

Bob Speltz also had a strong interest in canoes. This photo was reportedly taken on Okoboji Lake near Arnolds Park, Iowa. This canoe may also be one of the two canoes given to the Iowa Great Lake Maritime Museum in Arnolds Park after his death in 1993. -- Photo courtesy Mary Keating

of “The Real Runabouts,” and all with photographs galore. Volume I, copyrighted in 1977, was cited as the first book ever created that’s based on this specialized subject. His books, all printed by Graphic Publishing Co. of Lake Mills, Iowa, are still available on the Internet.

Volume VI, copyrighted in 1987, was the last book actually completed by Speltz before his death in March 1993. However, he had started to create a seventh book with the title of “The Real Runabouts.” Members of his family compiled the final volume in the series and it was published in 1996.

There are also two softcover books that Speltz created in his lifetime. One is based on wooden canoes and the other is about outboard motors. These publications are also available on the Internet. A friend of Speltz, Anthony Mollica Jr., has created a complete index based on the seven books in “The Real Runabouts” series that can be obtained by e-mailing Ship’s Stores at hqs@acbs.org.

Speltz, who had the nickname of “Hooper,” created other media items to emphasize his intense interest in the runabout boats. For example, he had three video tapes created of the “Bob Speltz World Series of Antique Boat Shows” held in 1984, 1985 and 1986 at the city beach on Fountain Lake. Each of these videos could be purchased from Speltz who was selling them out of his home at 505 Albert Lea St. 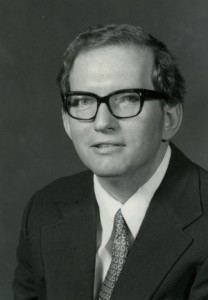 Also available by direct purchase or mail order were full color posters he had for sale of historic Chris-Craft and Century boats. And what were likely the most unusual items were 10 separate T-shirt transfers (T-shirt not included), all based on the theme of “The Real Runabouts” and the classic boats of yesteryear.

A 1981 Tribune article said Speltz was receiving 400 to 500 inquiries on the subject of boats each month in his mailbox. This gave just a hint as to how he kept busy before his death in March 1993.

What happened to all the research material Speltz accumulated during his years of writing the books and creating other printed items? The answer can be found at a lakeside museum in Arnolds Park, Iowa, near the site of the famous Roof Garden Ballroom and the town’s amusement park. One of the museum’s literature items had these comments:

“Bob had been in failing health for some years and decided to disperse his lifetime collections of boating information and memorabilia. He donated two beautiful wooden canoes to the Maritime Museum and they are on display here for your inspection. He also donated many archival items, including his lifelong collection of boating magazines, his compilation of materials on all the wooden boat manufacturers, and other items too numerous to mention here. Thanks to Bob Speltz, the Maritime Museum now has a wealth of old boating materials to draw on for future articles and displays. His collections will also be available through the Maritime Museum to researchers and those in need of this information.