A walking gate to the fair 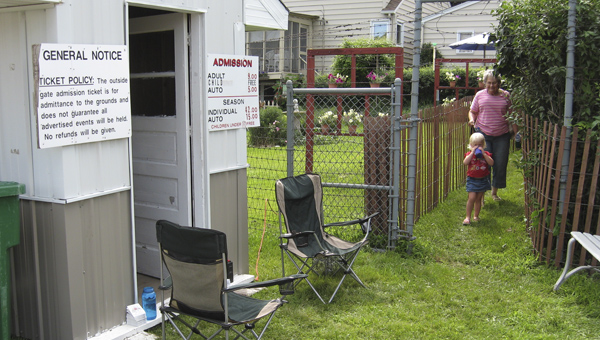 Allie Engbretson, 3, of Bricelyn and her great-grandmother, Betty Stalhiem, who lives nearby on Glenn Road, enter the Freeborn County Fair through the west gate on Tuesday. -- Ed Shannon/Albert Lea Tribune

During the Six Best Days of Summer, people entering the Freeborn County Fair have five places where they can gain access.

The most obvious entry point is the always-open main gate, with its arch facing North Bridge Avenue. A second place is off Hawthorne Street and at what’s normally the north end of Valley Avenue, where vehicles and people can enter during fair week. Then there are two entry places based on Richway Drive. The fifth place is just for walkers and is based on a gate in the fence on the west side of the grounds.

The fifth gate could be called the walking gate, the west gate, the Marie Avenue entry, and maybe even the Johnsrud gate or entry. 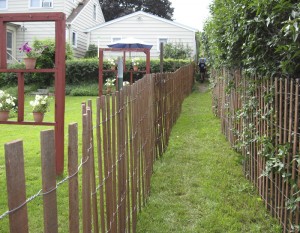 To gain access to the fairgrounds from Marie Avenue involves walking on a narrow path between two rows of snow fencing between the hedge and back lawn on the Johnsrud property. -- Ed Shannon/Albert Lea Tribune

About 1962, Donald B. Johnsrud, who lived on Marie Avenue, was asked by a member of the fair board if access could be made though his property to a proposed gate in the fairgrounds’ fence that bordered his backyard. Johnsrud at that time was a full-time postal employee and a part-time school bus driver.

In fact, his vehicle was kept in a fairgrounds building. Thus, he gained a short cut to start his second job and didn’t have to either drive or walk several blocks around the fairgrounds to the Bridge Avenue entrance. Johnsrud had a key and could use the gate at anytime. Thanks to him, the public gained the use of a fifth entry — for walking only — to the fair.

Just before fair week, a temporary white corner fence is placed next to Marie Avenue near the Glenn Road corner. Then two rows of snow fencing is placed between the hedge and back lawn of the Johnsrud property. Next to the gate in the fairgrounds’ fence a small building is put in place for the ticket takers. After fair week, all these items are removed and put in storage until the next year.