The funeral service for Frieda Mehus, of Albert Lea, formerly of Belmond, Iowa, will be held at 3:30 p.m. on Saturday at St. Olaf Lutheran Church in Belmond. Interment will be in St. Olaf Lutheran Cemetery. Visitation will be from 5 to 7 p.m. on Friday at Bonnerup Funeral Service, 2210 East Main, Albert Lea, and one hour before the service at the church. 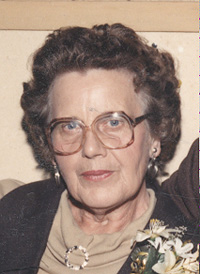 Frieda was born on July 19, 1923, at home west of Kanawha, Iowa, the daughter of Ben and Annie (Hiller) Lamfer. She was one of 14 children in the Lamfer family, which included five brothers and nine sisters. She attended rural country school just south of Kanawha. Frieda was united in marriage to Duane Mehus on July 3, 1941. They lived and farmed near Goodell, Messervey, Vinge and Leland, Iowa, until 1956 when they moved and farmed near Myrtle until retiring.