Ed Shannon, Between the Corn Rows

There are allegedly seven obscene words in the English language that shouldn’t be spoken on television programs. To this list I’d like to add several other ordinary words that don’t belong on several of the cable channels. One of my favorites is next. 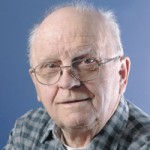 Here’s an example based on this word. During a news telecast the announcer shows a short clip of a Hollywood star about to fight off a police officer who is trying to make an arrest. The announcer excitedly says, “You aren’t going to believe what’s about to take place. We’ll have the rest of our exclusive footage next.”

And what actually comes next might be a commercial about a foot powder or some questionable medical product. This could be followed by a short commercial featuring a nice lady named Flo selling insurance. These television scenes about Flo are actually worth watching, but we digress. A third commercial message may be promoting a cat or dog food that’s guaranteed to make the family pet a much happier and healthier critter. After these moneymaking messages, the newscaster comes back on the scene. Now, we’ll be getting the rest of that exclusive footage about the Hollywood star being arrested.

Instead, this newscast continues with an update about excess oil in the Gulf of Mexico, followed by some senator’s visit to Iraq, a report on cod fishing in Norway, footage based on a horse being rescued from a deep irrigation ditch and three or four more commercial messages.

Maybe the rest of the exciting and exclusive footage about the Hollywood star being arrested will be a part of the next news segment, and maybe it won’t. Anyway, a more honest choice of words at this point would be “coming up.”

Let’s say one of the television affiliates of a cable news channel has a helicopter up in the air over a large metropolitan area. Down below on a freeway there’s a vehicle being chased by several police cars. Suddenly the cable news network cuts off the program in progress to feature coverage of this chase. What follows can be unpredictable.

I’ve seen several of these chase sequences that last long enough to actually replace commercials. That’s good, by the way. For these cable news channels, reportedly in the Los Angeles area, the live coverage of those chases or pursuits can really help to fill up time and even hold viewers’ interest. Again, we digress.

Here’s where the misuse of the word live becomes a problem. If this vehicle chase is televised again at a later time, then it isn’t live anymore. Yet, once in a while, like late at night, a vehicle chase will be shown that actually took place earlier in the daytime. If the announcer is using the phrase “live coverage,” then this indicates someone isn’t doing a good editing job.

To close off this commentary, we can consider two words that could be almost synonymous for television viewers. One is original and the other is uncut.

A prime example is having the cable channel announce that the upcoming program is the original film version of “To Kill a Mockingbird.” This make sense until the first commercial is introduced about 10 to 15 minutes after the start of this film. Then again, if the commercial features Flo selling insurance, then that’s plus.

There are also the original black and white programs from the olden days of television like the “Andy Griffith Show” and “Bewitched.” The mood or spirit of these programs ends with the interruptions by those commercials in color. Maybe the word contrast might help to emphasize this change from old to new television.

However, there are ways to actually enjoy these original films and even some television series, fairly recent or really old, and black and white or in full color. Without giving free plugs for any firms, let’s just say those films can be purchased for rented for uncut viewing, minus those interrupting and unwanted commercials.