Reviving the past at Graceland Cemetery 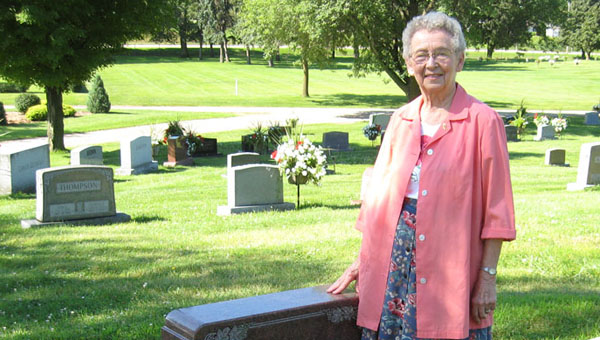 Alyce (Penny) Jacobsen will be portraying her mother-in-law Minnie (Engen) Jacobsen during her part of the “Echoes From the Past” program on Wednesday evening at Graceland Cemetery. The smock she is wearing is just like the one Minnie Jacobsen has when she was known as the “coffee lady” at Naeve Hospital years ago. -- Ed Shannon

Re-enactors portraying four former county residents now buried in Graceland Cemetery will be presenting the tenth annual “Echoes From the Past: A Journey Into History” on Wednesday evening.

This year’s program starts at 6:30 p.m. Those attending are asked to use the Clark Street (north) entrance to Graceland Cemetery, which is to the west of State Highway 13.

This year’s presentation will feature two women and two men who were part of Freeborn County life during the last part of the 19th century and the first half of the 20th century.

Pat Waters will portray the role of Emma (Bissinger or Bessinger) Leusman (1855-1920), who was born in Hamilton, Ontario, Canada, and came to Freeborn County with her parents in 1859. She grew up in Freeman Township and married Frederick (Fred) Leusman in 1882. Her husband was born during 1852 in the Waldeck region of what’s now Germany and came to Pickerel Lake Township with his parents in 1870. The couple then lived in Albert Lea. After her husband died in 1897, she continued to live in the city with their five children. 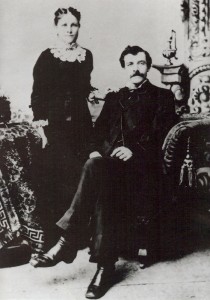 Emma Martha Bissinger and Frederick Leusman were married in Albert Lea on Jan. 31, 1882. This is their wedding portrait. The name Bissinger, incidentally, is also spelled Bessinger on some family records. -- Photo courtesy Freeborn County Historical Museum

Several past programs have featured re-enactors who actually had family connections with the people they were portraying. This year’s program has Alyce (Penny) Jacobsen assuming the role of her mother-in-law Minnie (Engen) Jacobsen (1896-1994)

Alyce has several historic photos, plus an Irv Sorenson “Hi-Lites and Shadows” illustrated Tribune creation from 1950 based on the Engen Livery Stable which will be a part of her presentation during the Wednesday evening program.

During his presentation Frame will cover highlights of McCornack’s life from the time he was born in Oneida, Ill., to college days in Galesburg, Ill., and Chicago, Ill. This will be followed with McCornack’s role as a Presbyterian pastor in Red Lake Falls, Howard Lake, Owatonna, and Great Falls, Mont. After leaving the ministry, McCornack became a rancher in Alberta, Canada, then moved to a farm north of Albert Lea in 1919.

He served as a state senator from 1930 to 1934 and was a judge of probate for a short time. McCornack was also the first president of the Freeborn-Mower Co-operative Light and Power Association, the firm’s original name, in the mid-1930s. And for many years and until his death he was president of the State Association of Local Creameries.

The role of John P. Larson (1887-1972), the owner of a local construction firm, will be assumed by Roger Wessels for this program.

Wessels will explain the unusual way Larson came to Albert Lea from Hamilton County, Iowa, at the age of 12 to join his parents. Also, during his part of the program. Wessels will give more details about Larson’s military service during World War I and the various projects the Larson firm built in and around Albert Lea. In later years Larson moved to Rush City where he continued with his construction business.

A news release from the Historical Museum states, “’Echoes From the Past’ will present the lives of two women and two men that lived and were part of the history of our county. Their stories will be told by re-enactors who have developed their story lines from data collected on each individual. Each presentation is 12 to 15 minutes. There will be only one presentation area again this year so the re-enactors will not be competing with each other to be heard. Following the presentations there will be refreshments. Seating is provided, but you may want to bring your own chair for more comfort.

“The program should be just over an hour and you will have the opportunity to visit with the re-enactors at the grave sites following the presentations. We hope to also have a representative from Graceland available for questions.”

The admission price is $5, children under 11 will be admitted free.

Pat Mulso, executive director of the Freeborn County Historical Museum, Library & Village, reminds those attending this program to park on Clark Street if they are able to walk a distance, or follow the instructions of the volunteers if they need to arrive closer to the performance location, but all attendees must come through the Clark Street entrance to receive their tickets for this event.

“Graceland is a lovely cemetery and a perfect setting to bring you stories of early residents of Freeborn County. Please join us for an entertaining evening as history comes to life,” Mulso commented.

In case of adverse weather, Mulso said the re-enactment program will be held at the Freeborn County Historical Museum, 1031 N. Bridge Ave.