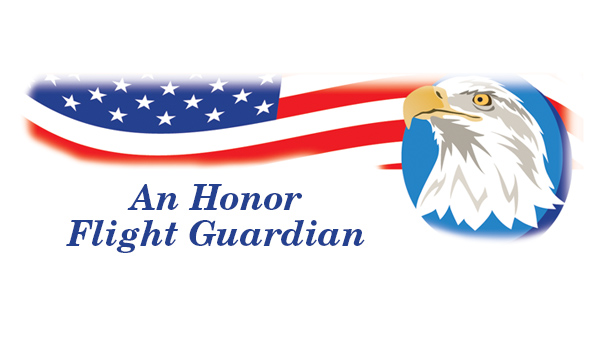 “I’d do it again,” is the reaction of Jennifer Boots who went to Washington, D.C., on June 16 as a guardian for a group of area World War II veterans as a part of the fifth Honor Flight Winnebago. 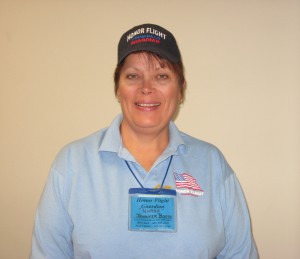 When Jennifer Boots went to Washington, D.C., on June 16 as a nurse and guardian with Honor Flight Winnebago, she wore this special T-shirt and cap. The card hanging off the lanyard served as identification and as a boarding pass on the airliner. -- Ed Shannon/Albert Lea Tribune

She participated in this one day trip on Sun Country Airlines as both a guardian for several veterans and as a part of the trip’s medical team. Boots is a nurse at the Albert Lea Medical Center. And going with the veterans on a special trip to visit their memorial were Lori Routh of Hartland, a nurse at ALMC, and Dr. Donald J. Kammerer, also from the ALMC staff.

“I paid my own way and got time off from ALMC,” Boots explained.

“It’s a journey that I’ll never forget,” she added.

However, for the World War II veterans the entire trip to and from the nation’s capital city was at no cost. Funds for their visits are raised in a variety of ways as part of the national Honor Flight organizations. 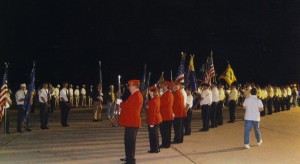 This was the scene on the runway of the Mason City, Iowa, airport as the Sun County Airlines aircraft arrived about 10:30 p.m. on June 16, The honor guard units from area veterans’ groups were there to greet the participants of Honor Flight Winnebago as they returned after a one day trip to Washington, D.C. -- Photos courtesy Jennifer Boots

The trip started at the Mason City, Iowa, airport at 7 a.m. Going on this very special visit were a group of World War II veterans from north central Iowa and south central Minnesota. Also making the trip to Washington were the guardians, including many veterans of the Korean and Vietnam wars, the medical team and a photographer who is now working on a video of the trip.

According to Bill Clark of Lake Mills, Iowa, one of the promoters of Honor Flight Winnebago, there were 92 veterans and a total of 162 passengers on the airliner. Two of the veterans, incidentally, were women who served during World War II, and one of the men was 98 years old. 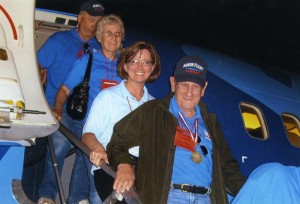 Among the people going to Washington, D.C., as part of Honor Flight Winnebago on June 16 was Lori Routh of Hartland, third from left. She served as a nurse on this flight. And on the right is her father, Gene Amley from rural New Richland. -- Photos courtesy Jennifer Boots

After several hours the airliner arrived at Dulles International Airport in Virginia, not far from the District of Columbia. The flight was greeted with a water salute by the fire department, a welcoming group and three buses.

The first place on their itinerary that day was the World War II Memorial. There are 56 columns in the memorial for the American states and territories hat contributed men and women for military service nearly seven decades ago. For the Winnebago contingent the main focus was on the columns for Iowa and Minnesota. 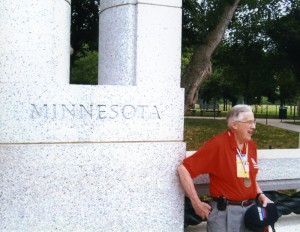 One of the 56 columns at the nation’s World War II Memorial in Washington, D.C., is for the veterans from Minnesota. The red T-shirts worn by the participants in Honor Flight Winnebago indicated the wearer was a World War II veteran. The blue T-shirts were for the guardians. -- Photos courtesy Jennifer Boots

This memorial, situated between the Lincoln Memorial and the Washington Monument on the National Mall, really revived memories of the years from 1942 to 1945 for the group’s veterans with its various significant details.

After visiting the “Jewel of the Mall,” the Winnebago group made a bus tour of Washington, then visited the Korean and Vietnam War Memorials. Next on the agenda was a tour of Arlington National Cemetery where the group observed a changing of the guard at the Tomb of the Unknown Soldier.

“This was my first visit to Washington. It’s really eye opening. The whole city is like a museum,” was Boots’ reaction to the nation’s capital. Among the places she cited during the bus tour were the nation’s capitol building, the FBI headquarters and the many Smithsonian structures based on the Mall.

As a guardian, she helped to guide three veterans, including two from Rockwell, Iowa. As a nurse, she “watched out for everyone” and made sure they all had plenty of water to drink on a hot day. Boots also carried candy bars in case one of the known diabetics would have a low glucose problem. She added that wheelchairs were available for those veterans who had mobility challenges. 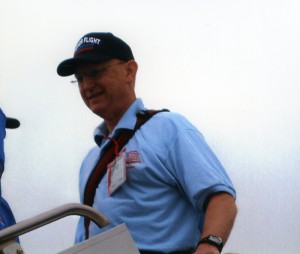 Dr. Donald J. Kammerer from the Albert Lea Medical Center served as part of the medical team that accompanied the Honor Flight Winnebago on their trip to the World War II Memorial in Washington, D.C., on June 16. -- Photos courtesy Jennifer Boots

The last place visited was the Iwo Jima Monument. Then the group went back to Dulles International Airport for the return trip to Iowa.

Boots said they arrived at the Mason City Airport about 10:30 p.m. the same day. And waiting to greet them were several honor guard units from area veterans’ organizations, plus friends and families.

“I urge other (World War II) veterans to make this trip. There are people who can help them and they’re so entitled,” Boots declared.

In a letter to the editor published in the June 20 issue of the Tribune, she wrote, “My heartfelt thanks to all the veterans who serve this country and to all the volunteers who make this trip possible and letting me be a part of it.”