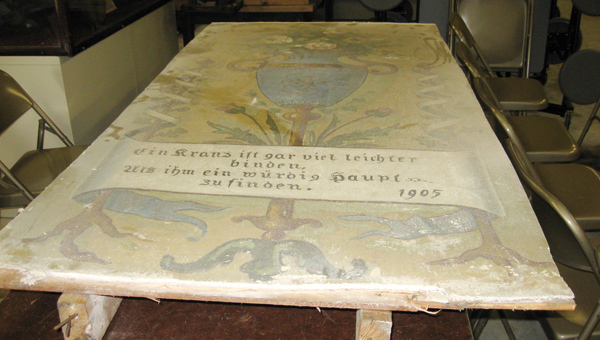 Here’s what the 105-year-old Wittmer painting now looks like. It was removed from the tornado-ravaged Marshall home west of Albert Lea on 680th Avenue and is now stored at the Freeborn County Historical Museum on North Bridge Avenue. -- Ed Shannon/Albert Lea Tribune

For 105 years what’s known as the Wittmer painting or mural was part of a historical home about seven miles west of Albert Lea. And on June 17 this home was nearly destroyed by a savage tornado.

In fact, the rural home known for years and years as the “Wittmer Place” on 580th Avenue (County Road 69) is no longer there. Yet, the painting on a wall above a stairway survived the storm and will still be a part of the area’s German heritage, especially for the descendants of Henry Wittmer (1857-1939).

In the 1880s Wittmer had the home built in Pickerel Lake Township several miles northeast of Conger. In 1905 he decided to expand the residence with an addition on the north side. 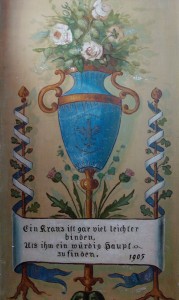 This photo of a historic painting by a still unknown artist was taken in December 2007. It was created in 1905 for German immigrant Henry Wittmer. It was located in the Wittmer home owned by Kevin and Barb Marshall, rural Alden, and survived the June 17 tornado. It’s now at the Freeborn County Historical Museum. -- Photo by Brie Cohen

The custom in that era was for the carpenters and painters to stay on the job until the project was completed. Thus, the group of craftsmen slept and ate at the Wittmer home during construction time.

According to several of Wittmer’s descendants, the painting was created by one of the workmen. He reportedly asked Wittmer if he could add a personal touch to an odd corner of the addition. The painting or small mural was done by the still unknown artist in his spare time.

This artist didn’t sign the 3-by-5 foot artwork. His creation shows a tall vase of roses with thistles at the base. A German eagle design decorates the front of the vase. On each side of the vase is a fancy stand.

Across the bottom is a banner with a German language legend based on either a part of a poem or folk saying.

The late Marvin Wittmer, Henry’s grandson, grew up in this German speaking household during the 1930s. He explained in a 1988 Tribune interview that the English translation is, “A bouquet of flowers is easy to bind, but one who is suited to have them is hard to find.”

For 105 years this painting was located on a wall above a stairway to the home’s second floor. The best view came when one descended the steps and could look directly at this artistic creation situated in a small alcove over the first floor doorway. Its location on the home’s north side protected the dated artwork from sunlight.

This rural home between Albert Lea and Alden was owned by three generations of the Wittmer family until May 1992. For the next eight years the home had several owners. Then, in August 2000, the historical home was purchased by Kevin and Barb Marshall. During all those years the small mural painted directly onto a plastered wall was never disturbed, until June 17. 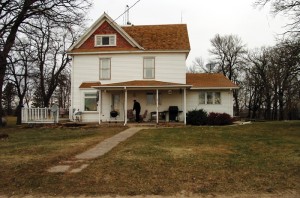 This photo of the south side of the Wittmer home was taken in December 2007. Four generations of this German-American family lived in this home from the 1880s to 1992. The historical painting that survived the June 17 tornado was located on the other side of the residence. This home no longer exists. -- Photo by Brie Cohen

Kevin, owner of Advantage Auto Glass, said the home was trashed and the roof was gone as a result of the tornado. The decision was made to tear down the residence. However, the decision was also made to try and save the artwork. He felt the painting was worth saving for its historical importance and as a part of the area’s German heritage.

The part of the building around the painting was carefully torn away. Then he and Doug Kuethe used a bucket on a back hoe to go up and cut the lathes and beams behind the painting on a plastered wall. Kevin did confirm that the painting was rained on before it could be removed. Then the artwork was placed in a nearby covered trailer for a few weeks.

It was decided to donate the painting or small mural to the Freeborn County Historical Museum. Thus, on Aug. 18, and after fair week, the artwork was taken to the museum and is now stored in the red building of the historical village.

Pat Mulso, executive director of the Freeborn County Historical Museum, said this unique artistic creation from the past will eventually be prepared for public viewing.

By appearance, the painting has somewhat slightly faded, sustained some chipping and there’s one small gouge. There are two barely visible cracks, but they may have been a part of the painting prior to the June 17 tornado.

“We plan to frame it and put it behind glass before it’s displayed, “ Mulso said.

“We also plan to contact the Minnesota Historical Society to see if it can be cleaned or left as it is,” she added.