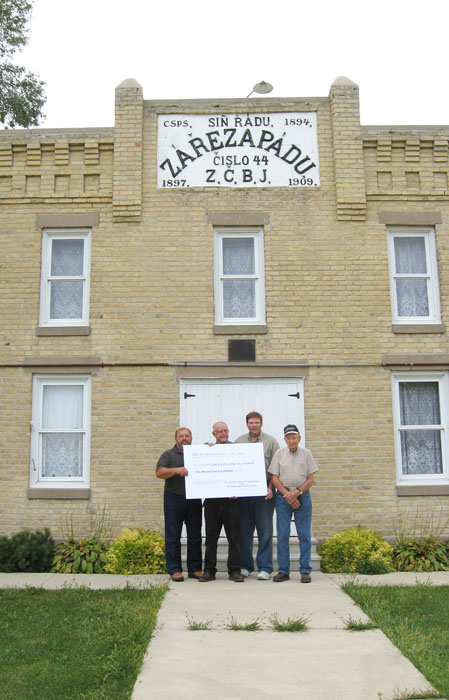 Holding a replica of the check from the Arts and Cultural Heritage Fund through the Minnesota Historical Society which was recently awarded for the exterior renovation of the famous Brick Hall are, from left, Jim Benesh, Lodge No. 44 president; Alton Krikava, project director; Freeborn County Commissioner Dan Belshan, who wrote the grant; and Emil Prantner, Lodge No. 44 trustee. -- Ed Shannon /Albert Lea Tribune

Zare Zapadu Lodge No. 44, better known as the Brick Hall between Myrtle and Hayward, has been awarded a Minnesota Historical and Cultural Heritage Grant of $10,500 for the tuck pointing and repair of this historic building.

The award was made on June 25 by the Minnesota Historical Society with funds made available by the state legislature with the Clean Water, Land and Legacy Amendment to the state’s constitution in November 2008.

Representing the Western Fraternal Life Association and the Brick Hall at the meeting in St. Paul when the funds were allocated were Alton and Marie Krikava and Bonnie Belshan. Belshan said the request for funds was made with her singing the proposal to the music of a Czech folk melody, “Song of Bohemia.”

This project is financed in part by the state from the Arts and Cultural Heritage Fund through the Minnesota Historical Society. The project will reportedly preserve the Brick Hall for use by future generations. The inspection and repointing of mortar joints and repair or replacement of damaged and missing exterior brick started in August by Quality Restorations of Rochester and is scheduled for completion in late September, weather permitting.

The place known as the Brick Hall is located on County Road 30 between Myrtle and Hayward and to the south of the Bohemian National Cemetery. This building may be one of the last freestanding fraternal lodge buildings in this part of the nation.

This 101-year-old building’s importance in the life and heritage for so many area Czech-American families helped to place it on the National Register of Historic Places in March 1986.

The tan brick building, with its background of oak trees, has stonework with black on white lettering over the front entry that has three dates, the initials of Z.C.B.J. and several words in the Czech or Bohemian languages. One of those dates is 1909. This is when the Brick Hall was built by members of Lodge No. 44.

Those initials of Z.C.B.J. are for Zpadni Cesko-Bradtrska Jednota of Cedar Rapids, Iowa, a Czech/Bohemian lodge founded in 1897, which is today known as the Western Fraternal Life Association (W.F.L.A.).