Roland Elmer Petersen, 82, of 800 4th Ave. S., Albert Lea, a loving father, grandfather, great-grandfather and great-great-grandfather, passed away peacefully, his children at his side, in St. Marys Hospital on Friday, Sept. 10, 2010. Roland died as a result of injuries he sustained after being hit by a car in Albert Lea. Visitation will be Friday from 5 to 8 p.m. at Bonnerup Funeral Service, Albert Lea, and one hour before service at the church. A celebration of life worship service will be held at 10:30 a.m. Saturday at Redeemer Lutheran Church in Alden. Roland will be laid to rest in the Alden Cemetery, located just west of Alden. 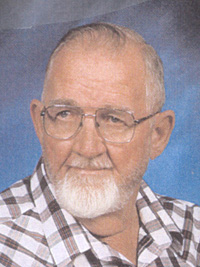 Roland was born Oct. 30, 1927, in Tyler. He was the fourth son born to Andrew and Dagney Petersen. Roland was baptized in the Danish Lutheran Church in Tyler, and was confirmed in the Danish Lutheran Church in Alden. Growing up on the Star Farm, a half mile south of Alden, he helped his father with chores and farming when his older brothers went off to WWII. He attended both Danish and English speaking grade schools. At age 15, he went to Brooklyn, N.Y., serving his country for two years in the Merchant Marines. Upon his return in 1945, he worked for the REA in Albert Lea. On July 4, 1946, he married the love of his life, Ida Behrends, daughter of Carl and Burnette Behrends of rural Armstrong. Together they started farming and raising their family on the Petran Farm, located one mile west of Alden, on old Highway 16. Roland farmed for 25 years, retiring in 1976. He appreciated the men he had working with him and thought of them all as family. He enjoyed entertaining family and friends at his lake homes in Elysian and Lake Francis. He later owned and operated Roland’s Point, a cabin resort located on the Blue Earth River in Rapidan.

His grandsons came on weekends and loved working with him, maintaining the grounds. Roland loved to host family gatherings and reunions. His elaborate planning included fun for all ages! Special memories include hay rides, barn dances, bobbing for apples, sweet corn feeds, sing alongs, camping, swimming, trail rides, podium speeches and big campfires and annual family vacations to Cross Lake. Joining his brothers and our cousins was the highlight of our summers for many years. Roland was a lifetime member of Redeemer Lutheran Church in Alden. He enjoyed being a member of Eagles, Moose, Elks, Albert Lea Senior Center, Solo Parents, Boy Scouts, Alden Gun Club, Mankato Cycle Club and the Albert Lea Kennel Club. He was an avid hunter and fisherman. He had a large garden and enjoyed his scooter rides across town to care for it daily. Roland tutored dyslexic students at the Lincoln School in Mankato for years. Having dyslexia himself, he created and taught an easier way for students to learn and overcome this reading and writing disability. Much time was spent training his purebred golden retrievers, Alice and Willy. He traveled far and wide with them, entering and winning many obedience and obstacle contests. Roland also had a passion for motorcycling. Over the past few years he put more than 90,000 miles on his Honda Helix and more than 35,000 miles on his 750 Honda. His travels took him through 35 U.S. states and three countries. Many plaques, trophies and mileage awards adorn his home. Roland loved the great outdoors. His grandchildren describe him best: Grandpa Roland was our mentor, a one of a kind, interesting, story telling, man of many talents, a fun loving family man with a big heart. He was much loved and will be deeply missed.