Locals search for ancestors in Norway 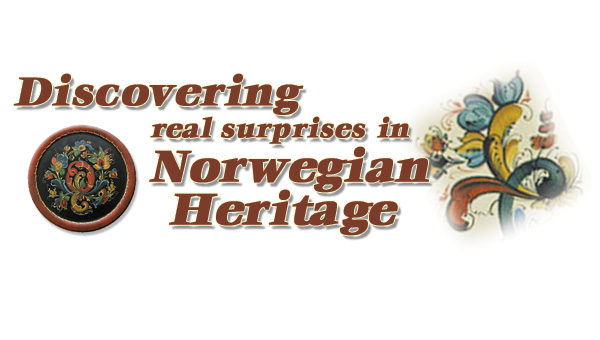 When Jeanne Gross retired from teaching in 2005, which included 18 years at Halverson Elementary School, she decided to do research into her Norwegian heritage. What resulted was an extensive amount of information on both her father’s and mother’s side of the family tree. And as one result of this endeavor, she and her husband, Don, decided to go to Norway in June.

Jeanne grew up in the Pine Island-Zumbrota area and her maiden name was Holthe. Here’s what she wrote about this part of her family tree: 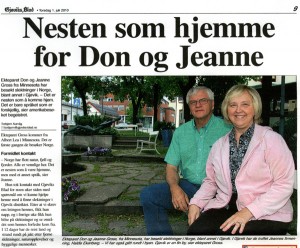 During their trip to Norway in June, Don and Jeanne Gross of Albert Lea were featured in an article published in the Gjovik, Norway, newspaper. -- Photo courtesy Jeanne Gross

“After doing a lot of research on my ancestry, I was very anxious to visit the areas in Norway where they came from. From a distant relative on my dad’s side, I was given the name of a couple from Stjordal (near Trondheim, Norway) where all my relatives on that side were living. They took us around to the family farms and into the Hegra Church that my ancestors all attended. I also visited the cemetery surrounding the church, where they are all buried.

“I was able to visit the inside of the Hegra Church in Stjordal, where all my ancestors on my dad’s attended. They were all buried in the church cemetery surrounding the church. Stordahl (rural Zumbrota) is the name of the church the immigrants … started in Minnesota, where they passed on their faith to future generations. My dad’s family for four generations worshiped here and are buried here.”

On her mother’s side of the family tree, the key community was Gjovik, Norway, located about 80 miles north of Oslo. Here’s her commentary about this part of the Norwegian visit:

“I had no contacts on my mother’s side, so I found several newspaper sites online and sent a request to put my info in their papers. One editor e-mailed me that he would put an ad in his newspaper and to let him know if it was answered. I had several replies, one from a third cousin and others from people who knew of this family. I was able to meet my third cousin and her husband and they took us around for two days. We went to the family farm where I met three more of my third cousins. We had coffee and cake on the porch and shared family pictures. This was the highlight of my trip. 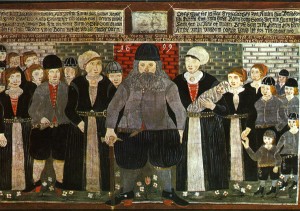 One of the real surprises for Jeanne Gross was seeing this portrait, created in 1699 by an unknown artist, that’s now in the Norsk Folk Museum in Oslo, Norway. In the center is her ancestor, Bjorn Froysok. To the left is his first wife and 10 children. One of these children is also her ancestor. After the death of his first wife, Bjorn remarried and had eight more children who are on the right. -- Photo courtesy Jeanne Gross

“The editor put a small article in his newspaper (Gjoviks Blad) that I had gotten a reply and was coming to Norway. On our last day in that area he called us and met us to take our picture and wrote an article about our visit with my relatives. So now I have been in a Norwegian newspaper!”

What has to be the most unusual part of her trip to Norway is explained this way:

“In my research I found out that my 10th great-grandfather on my mother’s other side had donated a portrait of his family to the Gol Stave church, which is now in the Norsk Folk Museum in Oslo. We went there and found the painting, which was done in 1699. It is of him and his deceased wife and their 10 children and his living wife and their eight children. How exciting to see what they looked like!”

Jeanne explains that her ancestral line is based on the left side of the portrait showing Bjorn Froysok, his deceased first wife, and one of their 10 children.

The Albert Lea couple took several photos of this portrait. However, they soon found out the unusual artwork from 1699 is reproduced on post cards sold in the museum’s gift shop. She describes this museum as representing “living history.”

During their 12-day visit to Norway she said many of the people, including some of the newly found relatives, could speak English. Yet, she declared, “I’m glad to hear English again.”

“I loved doing all the genealogy research and was so fortunate to be able to visit the areas of my roots. My husband, who is German, passed for Norwegian until they heard his last name! We rented a car and had all the travel reservations done by Brekke Tours, of Grand Forks, N.D. We spent part of the time on our own, part with relatives and did three city tours. This was a great way to travel, as there was a variety. We went to the Trondheim area, to the Lillihammer area and to Oslo and Bergen. What a beautiful country!” is her opinion of this very significant trip to Norway.