A celebration of Dennie’s life will be held at 2 p.m. Sunday at the Bonnerup funeral home located at, 2210 East Main Street in Albert Lea. 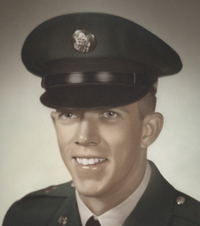 Dennie, as his family and friends would call him, was born May 31, 1942, in Albert Lea to Harold and Agnes McDonald. He graduated from Blooming Prairie High School in 1960. Dennie was drafted into the Army in April of 1964 and was assigned to 56th Engineering Company and sent to Fort Richardson, Alaska. He moved back home to New Ulm where he started his family and began working for 3M. As he moved up in his career with 3M, he relocated to Columbia, Mo., Anaheim, Calif., and finally to Austin, Texas. He retired in 1998 after working for 3M for 30 years in Austin, Texas, where he resided at the time of his death.

In Austin, he was a member of the Balcones Golf Club, where he spent time with and cherished his lifelong friendships with his 3M buddies. Dennie enjoyed golfing and spending time with his family and friends, but his true passion was woodworking. Dennie spent many hours building and refinished many beautiful pieces.

Proceeded in death by his parents, Agnes and Harold, and his brother, John. He is survived by his three children: Dan McDonald, Scott McDonald and his daughter, Keri Minugh; as well as a sister, Terry McDonald; sister-in-law; Nancy McDonald; daughter-in-laws: Valerie and Jennifer; and his three grandchildren: Danielle, Jordan and John.

In lieu of flowers, the family is asking for donations to be sent the Cystic Fibrosis Foundation.