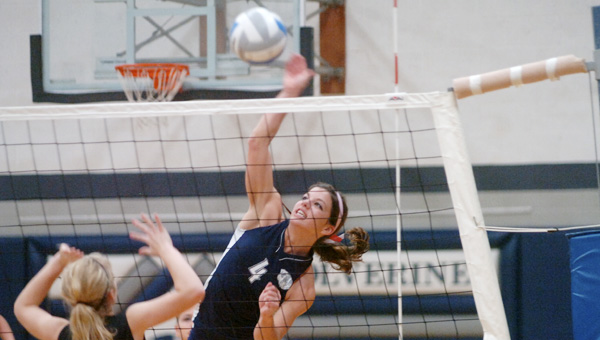 Alayna Hall spikes the ball during the first set of a 3-0 win over Alden-Conger. -- Jon Theuer

GLENVILLE — Alayna Hall and Emily Belshan each recorded 10 kills and the Glenville-Emmons Wolverines defeated the Alden-Conger Knights 25-19, 25-12 and 25-19 to earn the sweep and eliminate Alden-Conger from the Section 1A tournament.

Knights head coach Sarah Attig said that inconsistency from the service line played a part in the loss.

“Servicing hurt us tonight,” Attig said. “Thats part of our game we have actually been playing very well and it just wasn’t there for us tonight.”

The Wolverines responded, though, as Madi Ziebell served up four straight points to get some breathing room and record a 25-19 win.

In the second set, Glenville-Emmons again used great serving to jump out to a 23-10 lead and the Wolverines captured the set 25-12.

In the third set, The Knights jumped out to an early 13-8 lead with some solid serving from Jamie Dunham and Ariel Keller.

Glenville-Emmons then used a 7-0 run courtesy of Alayna Hall to put the Wolverines ahead of the Knights 18-13 and pushed Glenville-Emmons passed Alden-Conger 25-19 to earn the sweep.

Hall ended the match with 10 kills and four ace serves.

“She was everywhere,” Ziebell said of Hall. “Her serving, her digging. Sometimes I get caught up watching her instead of coaching.”

Along with Hall, Belshan had 10 kills and two ace blocks on the night for the Wolverines.

The Knights were led by Ariel Keller as she finished with 15 digs, tallied 11 kills and went 11-for-11 from the service line.

Karina Skov recorded 15 digs with four kills and finished 7-for-7 in serving.

Attig says one of the positives out of the season was getting her younger players experience.

The Knights have nine players on their roster that are sophomores and freshman.

“That is a positive,” Attig said, of the team’s youth. “These girls play well together and work hard. A lot of it tonight was inexperience. Covering the tips, the blocks, the hard hits and reading the hitters, that’s all inexperience. We will be very strong if they continue to play together.”

“If we play consistent and get our serves in and get our hits down, we can give them a battle,” Ziebell said. “We kind of struggled a little bit tonight on passing. The kids said thats what were working on the next two days coach is passing. We got to pick that up, if we are going to beat Kenyon, we need better passing.”