Mythical universities at Okoboji and Hartland

Ed Shannon, Between the Corn Rows

One of my first Tribune columns back in September 1985 featured a copy of a ticket for a football game between the Fighting Phantoms of the University of Okoboji and the Fighting Irish of Notre Dame University. This game would be played on Sept. 31 that year in Our Lady of the Lakes Stadium in Lake Okoboji, Iowa. Proceeds from this game would be used to construct a dome over West Lake Okoboji.

Now, let’s deal with reality. Today is actually Oct. 1 and everything else in the preceding paragraph involving that football game is false. 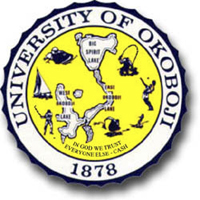 They call the University of Okoboji the “university without walls.” That isn’t quite right. Actually, the heart of this mythical creation seems to be between the walls of Three Sons Clothing Store in downtown Milford, Iowa. Here’s where all those T-shirts, shorts, sweaters, stickers and other souvenir items (including a genuine cookbook) originate. These goodies have been carried and worn all over the world by the eager alumni of this unique institution of higher (or lower) learning. And back in 1985 this store was also selling T-shirts for another mythical creation, Okoboji Airlines. This caper never quite took off. However, the fictional university is still very active.

This university was created by clothing merchant Herman Richter, his two brothers and several friends in 1972 as a fun-type gimmick. This group obviously had overactive imaginations and plenty of spare time. The date of 1878 was chosen by the “founding four-flushers” to give the school some age, and as an excuse for a centennial celebration.

The folks in Spirit Lake, Okoboji, Arnolds Park, Milford and nearby towns in the popular tourist and recreational area known as the Iowa Great Lakes have had a lot of fun though the years with this humor-loaded caper. Those capers include real homecoming dances, winter games, soccer classics, tennis, swimming and softball events. This, plus the continued sales of souvenirs, have resulted in enough profits for the promoters to finance various public service causes in this part of Iowa. Even good natured foolishness has it rewards.

Besides all the souvenir items for this fictional university allegedly just south of Jackson in Dickinson County, Iowa, there are two more interesting details worth noting, including one from this area.

The first is radio station KUOO in Spirit Lake. The call letters for this very real FM broadcaster may explain why it’s promoted as the “campus radio station.”

The second is the “University of Okoboji Fight Song” that was created and recorded by Dan and Bonnie Belshan of rural Myrtle several decades ago.

Back in 1985 I suggested that a mythical football game should involve the Fighting Phantoms and the former Lea College. Another logical opponent back then could have been Boondocks University, Iowa’s other great fictional institution of higher (or lower) learning. Incidentally, back in that era Boondocks University was based on a truck stop between here and Ames, Iowa, near an exit off Interstate 35.

Both the University of Okoboji and even Lea College can be found on Google. However, there seems to be no access to a specific listing for Boondocks University.

Now I have new opponent for the Fighting Phantoms in the make believe Podunk Bowl. It’s Hartland University. The phone book listing calls this place the Hartland Pub; the sign at the entry says Hartland University. I might add that this particular place with an educational name specializes in afternoon and night classes based on relaxation.