Rebuilding a wagon at the historical museum

There was a era when a farm wagon with an undercarriage or chassis needing serious repair or even replacement could have been taken to a blacksmith shop or wagon maker’s business location. However, at the present time repairing a farm wagon could involve an interesting challenge. 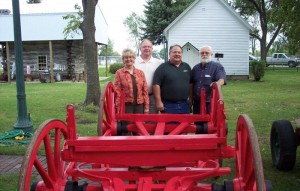 For an older wagon at the Freeborn County Historical Museum, Library and Village this challenge was accepted by three volunteers who repaired and repainted this item from farm life of the past.

One of those museum volunteers, Dave Mullenbach, said the repair job on the wagon’s undercarriage started two years ago. He explained that entire framework under the wagon’s box was just plain rotten. However, the axles and wheels with their wooden spokes were still in good condition and just needed some touching up.

The box was removed and the framework was dismantled. Then a second volunteer, John Foreman from Alamco, cut the new pieces of donated wood to match the parts to be replaced. Then Mullenbach tooled the wood to fit the exact dimensions of the original parts. He added that most of the work was done in the museum’s workshop and some was done at his home.

Mullenbach said the ironwork on the wagon’s undercarriage or framework was OK. He used a product known as liquid nail as a filler as needed around the wheels and axles. 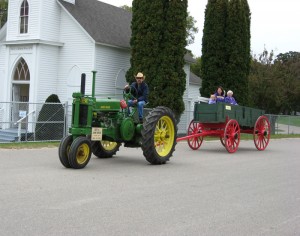 One of the most popular aspects of this year’s Autumn In the Village on Sept. 19 was riding in the newly rebuilt farm wagon. The tractor pulling the wagon is a 1937 A John Deere donated to the museum by Dick Slegh. Driving the tractor for those rides were Ted Radke and Jim Martin. -- Ed Shannon/Albert Lea Tribune

After the restoration project was completed during the summer, a third volunteer, Bruce Olson, primed and painted the wagon’s entire undercarriage with a color some folks might call barn red. Part of the axle assembly was painted black.

“I think it turned out really nice,” Mullenbach commented.

The green box was then placed back on the mostly new chassis.

The project was competed just in time for the annual Autumn In the Village event on Sept. 19. And both Mullenbach and Pat Mulso, the museum’s executive director, said the wagon ride of this event this year was very popular.

Incidentally, the wagon could be described as a convertible. In other words, the wagon’s long tongue can be adapted for use by a team of horses or a tractor. This year the wagon rides for those attending Autumn In the Village featured a tractor.

Mulso said the wagon will be stored in the red building for the winter.

The next phase for rebuilding of this wagon will be a new box. The present box or body of the wagon tilts somewhat from front to back. That’s partly due to a problem with turning. With the present box those turns have to be rather wide. That problem will be solved somewhat with a new box.