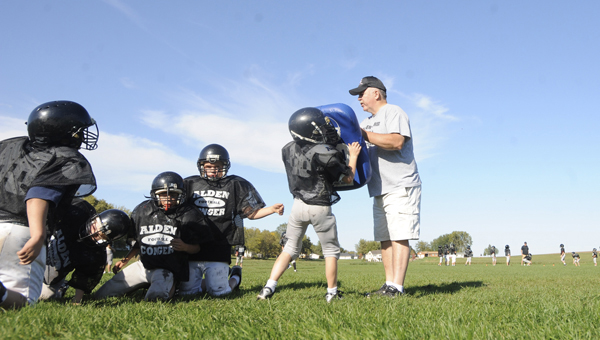 ALDEN — While Albert Lea has reintroduced its own youth football program this fall, for the past 11 years, when kids wanted to hit, they’ve gone to Alden. 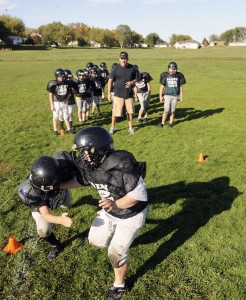 Jared Dawson, center, of Albert Lea, instructs third- and fourth-graders as they work on tackling drills behind the Alden-Conger school. -- Andrew Dyrdal

“Kids come from Albert Lea if they want a taste (of tackle football).”

The Alden-Conger youth football program has 55 participants — from third- to sixth-graders — and around 11 are from Albert Lea.

The kids practice Tuesday through Thursday, and have games every Saturday. Sixth-graders play first, followed by firth and then third- and fourth graders. And everyone plays, Bremseth said.

Their practices are held behind the Alden-Conger school, right next to the varsity football field, giving the young players a group to look up to just a crank of the neck away.

“The varsity guys don’t realize how much the younger players watch them,” Bremseth said.

Players are positioned based on weight. Fifth- and sixth-graders who weigh less than 120 pounds play quarterback, running back, wide receiver or in the defensive backfield. Players over 120 pounds are on the line or are linebackers.

They aren’t stuck at one position all season, though.

“We mix them in at different spots,” Bremseth said. “We don’t put a sign on them that says, ‘oh, you’re going to be a quarterback.’” 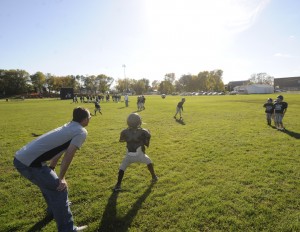 Cole Wentzel, of Albert Lea, throws a pass to a receiver behind Alden-Conger school. The A-C varsity football team can be seen in the background. The youth football players look up to the older kids. -- Andrew Dyrdal

Bremseth also said that the assignments based on weight is also a safety precaution, so that players don’t have to block kids twice their size, although the athletes rarely get hurt.

“They just run together, wrestle and fall over,” said Bremseth of the tackling. “They don’t have the technique down yet.”

Third- and fourth-graders are taught stances, timing, throwing and catching, how to hand a ball off and which hole to run through.

Fifth- and sixth-graders keep learning how to throw and catch, along with tackling.

“It takes a lot of kids over a year to learn how to tackle,” Bremseth said, adding that it’s harder for players to tackle in real games than practice because of the nerves.

He also said their favorite expression after they’ve missed a tackles is, “I almost had him!”

The Alden-Conger youth football program started 11 years ago and played in-house for two years, before joining a four-team league along with St. Clair, Janesville-Waldorf-Pemberton and Le Center. 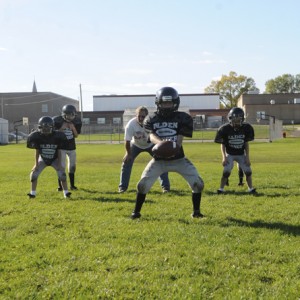 It then turned into the 21-team Southern Minnesota Youth Football League but Alden-Conger left two years ago for the Central Minnesota Football League, because they had a fourth grade division. Now they play with St. Clair, J-W-P, United South Central, Madelia and Truman.

The teams play 11-man football with 10 minute running clock quarters. Each game takes about an hour, and they play six regular season games a fall, with a two to three game playoff.

They are also required to play a 5-3-3 defense with no offensive motion, and must have to players in the backfield. The fourth-graders recently went to a 4-4 defense, though.

“It’s a lot of fun,” Bremseth said about coaching the teams, noting his favorite thing is when he sees the light bulb go off in their heads.