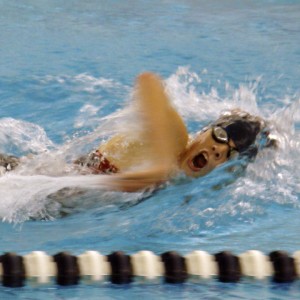 The Albert Lea girls’ swimming and diving team captured their first win of the season against Mankato East Tuesday night with a score of 95-84.

“We took the lead from the very first event and we never let go,” Albert Lea head coach Jon Schmitz said. “It was our first win and it feels good.”

Getting things going for the Tigers was the 200 medley relay team of Bailey Sandon, Morgan Field, Amy Horejsi and Lindsey Horejsi who took first-place with a time of 2 minutes and 1.24 seconds. Kemma Bergland and Whitney Rasmussen finished second and third, respectively, in the 200 free.

Lindsey Horejsi dominated the 200 individual medley, finishing almost four seconds ahead of the rest of the field. Galen Schulz was not to be outdone in the 50 free, she finished first with a time of :26.22.

Karli Kriewall dove her way into a first-place finish with a score of 196.70.

They are learning how to race and they are doing a really good job of supporting each other,” said Schmitz about his team. “That is what being a team is about.”

Amy Horejsi had her best swim of the season in the 100 butterfly to finish in second-place with a time of 1:05.92.

Hannah Hertling and Ahnika Jensen swam to third- and fourth-place finishes for the Tigers in the 100 butterfly.

Lindsey Horejsi took control of the 500 free finishing more than nine seconds ahead of the Cougars’ of Allison Ellstrom. Mady Dahl swam a season best time to finish in third with a time of 6:16.13.

In the 200 free relay, the team of Galen Schulz, Anna Anderson, Morgan Field and Amy Horejsi finished in first-place with a time of 1:49.78.

The 400 free relay team, made up of Kemma Bergland, Anna Anderson, Galen Schulz and Lindsey Horejsi swam into a very comfortable first-place finish with a time of 4:02.59, with the Tigers other relay team made up of Whitney Rasmussen, Lauren Sorenson, Claire Nelson and Bailey Sandon coming in second with a time of 4:29.64.

“We deserved to win tonight, Schmitz said. “This team is not the same team it was at the beginning of the year. The younger swimmers are really producing for us and everyone is learning their role on the team.”