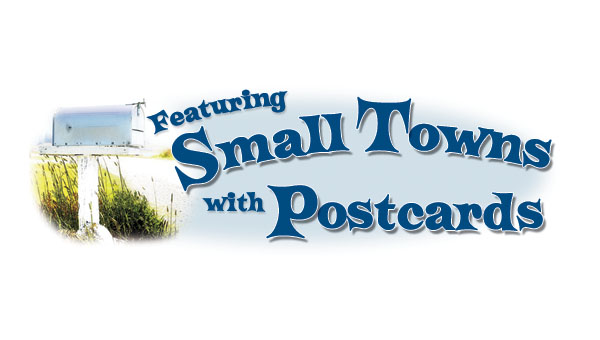 Local postcards are based on scenes in and around Albert Lea

Among the postcards in the archives of the Freeborn County Historical Museum Library are six based specifically on area communities. 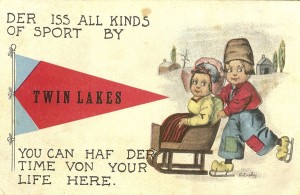 Through the years local postcards have been based on scenes in and around Albert Lea. These actual photographs, sometimes color tinted, have featured the Freeborn County Courthouse, scenes along Broadway Avenue, the former Hotel Albert, various scenes around Fountain Lake and even the Itasca Rock Garden. Then there’s a postcard depicting a very young lad who has evidently been traveling around the region. He reportedly says he likes it in Albert Lea. Maybe the very young miss sitting on his lap influenced his decision.

Incidentally, this type of postcard can obviously be adapted for sale in any other community.

Partial proof for this statement can be seen with the postcard featuring London. The postmark shown on this card actually has a date of 1914. By the way, the postman depicted seems to be rather young. 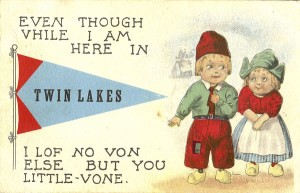 Still another example of these postcards from the past being personalized to fit specific communities is the one for Hayward. In reality, the generic scene of a country roadway or path could fit in just about anywhere in the region.

The one postcard in this collection that has really been personalized for a locality is the one for Armstrong. During the era when a one-cent stamp was the legal postage for a postcard mailed to an address anywhere in the nation, this community between Albert Lea and Alden had a general store, bank, creamery, grade school, railroad depot and grain elevator.

These postcards adapted to feature a specific community could also come as part of a series. For example, there are the two cards with Twin Lakes printed within the pennants. Two young children in very obvious Dutch clothing are depicted on each of the cards. The printed messages on these postcards represents a rather warped version of Dutch-English dialect.

An odd detail on one of these postcards is based on the footwear worn by the young lad. Just how are those ice skates really attached to those wooden shoes? 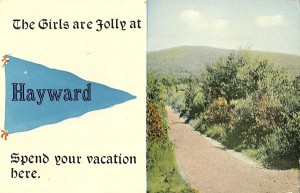 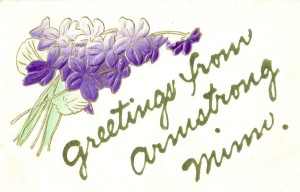 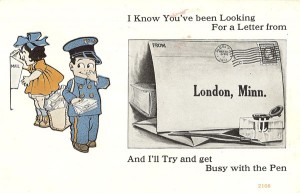 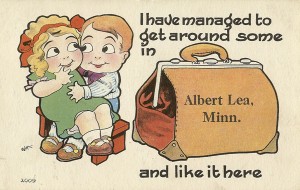