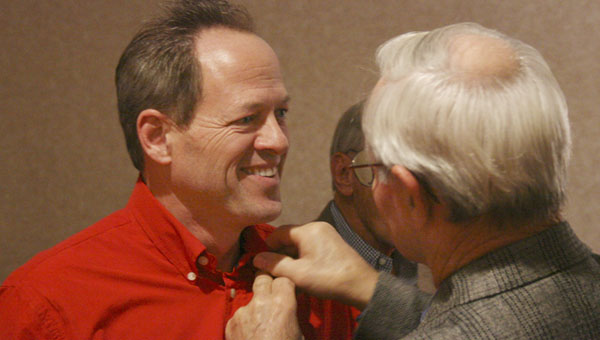 Albert Lean Rich Murray smiles as his father, Dick Murray, places an American flag pin on his shirt after he found out he won the District 27A House of Representatives seat Tuesday night. --Sarah Stultz/Albert Lea Tribune

In what many described as a nail-biter race, Republican District 27A House of Representatives candidate Rich Murray on Tuesday defeated incumbent DFL Rep. Robin Brown by a mere 58 votes.

But there could be a recount.

Minnesota law requires recounts in races within a margin of victory of 0.5 percent or less. The 58 votes equal less than 0.4 percent.

Surrounded by family and friends in a banquet room at America’s Best Value Inn, Murray, 53, of Albert Lea, said he will do his best to represent the people of the district and thanked Brown for her two terms in office.

“I’m honored and humbled by the confidence you guys have placed in me,” said Murray, a financial adviser.

He noted he knew by looking at the results coming in throughout the night that the race was going to be tight.

In fact, the nature of the race was evident as Murray, his family and friends huddled around a computer and spreadsheets in one corner of a room filled with Freeborn County Republicans, while Brown and her family sat around a laptop at a table in a room down the hall for the Freeborn County DFL Party.

At one point Murray was ahead; the next, Brown would move forward.

Ultimately, Brown defeated Murray in Mower County by 358 votes, but Murray made up for the difference in Freeborn County by 416 votes. The difference was 58 votes.

Brown, 49, of Moscow Township, conceded to Murray shortly before 11 p.m., after finding out the final results.

She said on Wednesday morning she will continue her job as an art teacher at Albert Lea High School, noting it has always been her motto to teach even on Election Day and the day after.

She said she and Murray have many of the same priorities and she wishes Murray success — because success for Murray means success for the district.

Brown noted she cannot close the door on a future in politics, pointing out that there will be re-districting in the near future.

Murray said he is overwhelmed, elated and honored by the results of the night and stated he wants to do his best to represent the people of the district.

His father, Dick Murray, presented him with an American flag pin after the results were finalized.

“We’re very proud of him,” his mother, Ruth Murray, added.

Murray pledged to work hard every day for the district’s voters.

“Thank you from the bottom of my heart,” he said.

He said he wants people to call him if they disagree with any of his decisions.

“I want to be the same guy next year that I am now,” Murray said.

In the meantime, before the new year rolls around, he said he hopes to take a couple days off with his wife, and then he will be busy with his job through the end of the year.

Freshmen orientation will be at the beginning of December.