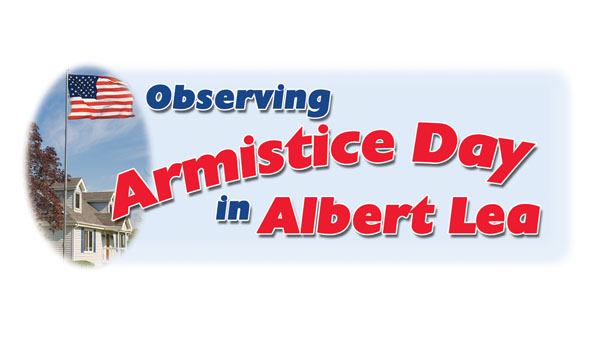 There are two American holidays that have had different names through the years. One is Decoration Day; now Memorial Day. The second is Armistice Day which is now observed as Veterans Day.

Now, when was the first observance of this Nov. 11 holiday held in Albert Lea? The answer may be based on three different events. 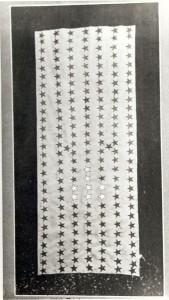 Albert Lea’s second known observance of Armistice Day was held on Nov. 11, 1920, in the chapel of Luther Academy. At that time this service flag on the wall was taken down and retired. The eight lighter stars are for the school’s alumni who died while serving in the military service. The two offset stars are for women who served as military nurses.

The key phrase for the Nov. 11 date is based on the end of World War I in 1918. The exact time for the truce that ended this brutal war resulted in the phrase, “the eleventh hour on the eleventh day of the eleventh month.” Thus, 92 years and several major wars later that phrase is still the standard for the observance of what’s now Veterans Day.

News of the war’s end came to Albert Lea by telegraph, telephone and the Tribune’s news service teletype machine. This resulted in a spontaneous celebration by area people until about noon. Then arrangements were made for an impromptu parade starting at 1 p.m.

This parade was, according to the Tribune, 18 blocks long and included just about anything available. There were people galore holding flags, the city’s new gasoline-powered fire truck and all available vehicles. The procession went though the business district to the Freeborn County Courthouse where a mock funeral was held for Kaiser Wilhelm II, Emperor of Germany and King of Prussia. Then the parade went to what was called the city dump ground where the Kaiser’s coffin was burned. Thus, the city’s first unofficial Armistice Day was observed on the day it actually happened.

(In reality, Kaiser Wilhelm II, who was called Bill or Willie by Americans at that time, left Germany at the end of this war and went into exile in The Netherlands where he died in 1941.)

During 1919, Minnesota and five other states (Oregon, Michigan, Maryland, Massachusetts and Texas) designated Nov. 11 as a legal holiday. And in 1938 Armistice Day became an official American holiday for all the states.

Also, during 1919, the national American Legion and Albert Lea’s Leo Carey Post 56 were both organized. Yet, there’s no indication that Armistice Day was observed in the city during that same year.

The city’s second observance of Armistice Day may have taken place at 11 a.m. on Nov. 11, 1920, in the chapel of Luther Academy on East Fourth Street. During this special patriotic occasion the school’s service flag was taken down and retired. On this flag were 199 stars for the school’s alumni who served in the nation’s armed forces during World War I. Most of the stars were blue. Eight were gold for those who died. Nine were silver for the servicemen who were wounded and/or gassed, and two were red for the young ladies who served as military nurses. 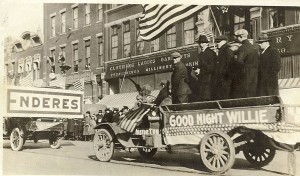 This part of the hastily organized parade in Albert Lea on Nov. 11, 1918, was sponsored by the Motor Inn firm. The parade was held to celebrate the Armistice that ended World War I. The person named Willie was actually the leader of the enemy, Kaiser Wilhelm II of Germany. — Photos courtesy Freeborn County Historical Museum

During 1920 the city’s second major veterans’ organization was created. This was Freemond Madson Post 447 of the Veterans of Foreign Wars. This post, incidentally, will be observing it 90th anniversary this year.

With two new and very active veterans posts and other organizations ready to help out, Albert Lea observed its first official Armistice Day on Nov. 11, 1921.

Despite inclement weather and snow on the ground, the participants paraded to the Freeborn County Courthouse where a short flag raising ceremony was held. Then the focus shifted to the north where an 11 a.m. program was held at the Idle Hour Theater at the corner of North Broadway Avenue and Water Street. (This building is now the Marion Ross Performing Arts Center.)

What added an unusual touch to this observance was Bennett Knudson of Albert Lea reading the same speech given by President Warren Harding that same day at the dedication of the Tomb of the Unknown Soldier at Arlington National Cemetery.

President Harding’s speech had been prepared in advance and copies sent out to newspapers, including the Tribune, by the Associated Press on teletype. The intention was for local speakers around the nation to read this speech on Nov. 11 that year at about the same time it was given at Arlington National Cemetery.

In 1938, Armistice Day became an official national holiday. And in 1954 Congress passed an act that changed the name of this particular holiday to Veterans Day.

Look to the Nov. 10 edition of the Albert Lea Tribune for a special section insert all about veterans and veterans’ organizations in Freeborn County. There will also be a listing of area Veterans Day events and programs.