A snowplow is the king of the jungle in Minnesota

“Everything is nearly copacetic. My sister Cruella told me about six Brazilian men being injured while skydiving. I guess I wasn’t listening very well because I asked her how many are in a Brazilian. Cruella started telling everyone that I’m dumber than a bag of hammers, so I had to prove to her how smart I am by going to the lutefisk feed at church. My stomach has been bothering me ever since. I think I got a bad batch of lutefisk. It was probably the sixth plate of the stuff I ate that did it. It was glowing in an odd green color. I went to see Doc Splint Eastwood. He checked me out and gave me a prescription for some stuff I’m supposed to drink an hour before breakfast each day. I prefer arising at the crack of noon, but I thought I’d try to make Splint happy. He needs something more in his life than just counting his money. The medicine tastes like sour milk having a bad day. I’ve tried it for a week now and I feel worse.”

“Did you drink it an hour before breakfast each morning as Splint advised?” I say.

The cats (Ethel and Purl) and I were staring out the window at a stray yellow tomcat with an oversized head. The cats who were sharing the view with me never set a paw outside. I wished the tomcat had a home to go to on a day featuring some of winter’s worst traits. 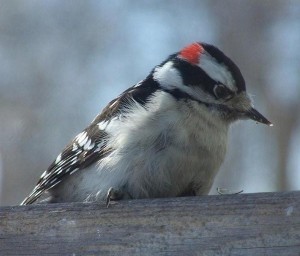 Photo of a downy woodpecker by Al Batt.

A Bob Dylan song on the radio warbled, “Don’t think twice, it’s all right,” as the cats and I watched the intruder plop down in the snow near the bird feeders.

Four hen pheasants moved in to feed on the corn that I had placed on the ground for them. The tomcat was near the corn and attempted to hold his ground. His eyes shifted nervously as the pheasants came closer. He was outnumbered. The tomcat did a stiff-legged walk away in a retreat. I’m sure that he was frightened, but he didn’t want to show it.

The pheasants gobbled the kernels of corn with gusto until the snowplow went by in yet another attempt to remove one more layer of snow from the road. The blade scraped loudly, snow flew in curtains and the truck’s engine growled.

Ethel and Purl moved from the window and went off to take catnaps, convinced that the snowplow was the king of the jungle.

“Where might I see ravens?” Common ravens are found primarily in the boreal zones of northern Minnesota. Northeastern Minnesota is a good place to find them. They are found as far south as Pine County. Ravens have shaggy throats, heavy bills, wedge-shaped tails and guttural calls. Crows have slim throats, slim bills, square-shaped tails and higher-pitched calls.

“What is it that the wild turkey has on its head?” It’s not a hat. The wattle is a fleshy growth that hangs beneath the chin and the snood is the flap of skin that drapes over the bill.

“What are the hawks I see along the roads?” Most of them are red-tailed hawks. They appear to be a mottled brown, football-shaped bird. The red tail is not always apparent, but the hawk often has a dark bellyband. The red-tailed hawk makes use of utility poles to hunt for prey in the grasslands along the highways.

“Is it OK to feed peanut butter to the birds?” Try offering peanut butter mixed with cornmeal to make it firmer, especially during warmer weather. It could be frozen in cakes and placed in suet cages or stuffed into holes drilled into a small log and hung from a tree limb or feeder pole. Some folks smear peanut butter onto tree trunks. Squirrels eat it quickly. Peanut butter is high in protein and fat, and might offer the nutrition that insect-eating birds seek. Seed eating birds like the fat and protein too. There is no scientific evidence of birds choking on peanut butter.

“Where did the Eurasian collared-doves come from?” A century ago, this species was found primarily on the Indian subcontinent. In the early 1900s, it began expanding its range and by 1950 had reached the British Isles. The doves were introduced into the Bahamas in the 1970s. At some point in the 1980s, the doves moved without assistance to Florida and by 1998 to Minnesota. Today, collared-doves are living above the Arctic Circle in Scandinavia.

Harlequin ducks are multi-colored and named after the jester of traditional Italian comedy. The ducks made a squeaking sound that has earned them the nickname “sea mice.”

Most woodpeckers have tongues that are two to three times longer than their bills.

Carrol Henderson of the Minnesota Department of Natural Resources says that the most often seen neotropical bird in Costa Rica is the Baltimore oriole.

As early as the thirteenth century, Kubla Khan used over 200 gyrfalcons to hunt in Manchuria. Gyrfalcon comes from the Old French gerfaucon, with the first element “ger” meaning spear.

The downy woodpecker is the smallest woodpecker in the United States and is found in all states but Hawaii.

A rock pigeon is capable of speeds over 80 mph.

A woodchuck can dig a 5-foot long tunnel in one day.

The Seventh Wintering Golden Eagle Survey of the Bluffs and Coulee Region of the Upper Mississippi River will be on Jan. 15. If you would like to take part, contact Scott Mehus at scott@nationaleaglecenter.org or at 651-565-4989.

Please count the birds in your neighborhood or at your feeders. The Albert Lea Christmas Bird Count will take place on Tuesday, Dec. 28. Please contact me at 507-845-2836 or at snoeowl@aol.com for information on reporting birds.

“Reflect on your present blessings, of which every man has many; not on your past misfortunes, of which all men have some.” — Charles Dickens

“If the sight of the blue skies fills you with joy, if a blade of grass springing up in the fields has power to move you, if the simple things of nature have a message that you understand, rejoice, for your soul is alive.” — Eleonora Duse

Thank you to all who helped the musuem this…