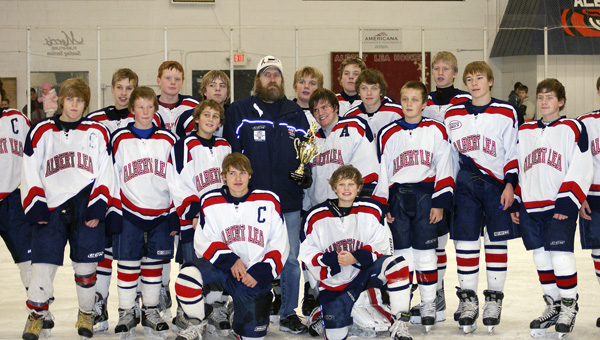 Rick Kelly, center, poses with the Albert Lea ‘B’ Bantams hockey team after winning the Albert Lea tournament’s third place trophy. The tournament was dedicated to Kelly, who is suffering from lung cancer. -- Submitted photo

The Albert Lea ‘B’ Bantams played their home tournament this past weekend. The tournament was dedicated to local resident Rick Kelly, hockey dad, coach and current ‘B’ Bantams team manager, who is battling lung cancer.

Players and parents all wore Kelly’s initials and ribbons in his honor and for his dedication and contributions to the Albert Lea Hockey Association. 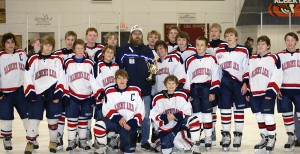 Rick Kelly, center, poses with the Albert Lea ‘B’ Bantams hockey team after winning the Albert Lea tournament’s third place trophy. The tournament was dedicated to Kelly, who is suffering from lung cancer. -- Submitted photo

Friday night opened with Albert Lea defeating Owatonna 6-1. Albert Lea took a 2-0 lead after the first period with goals by Alec Avery and Tatum Miller. They increased their lead early in the second with a goal by Taylor Herfindahl, with an assist by Toby Schmitt. Avery notched his second goal of the game, assisted by Jack Pulley. Miller then scored for the second time, assisted by Avery to close out the second period. Third period scoring was Ben Kelly with the assist from Ryan Peterson.

Saturday morning brought a hard-fought battle against eventual tournament champions, the Des Moines Jr. Buccaneers, which ended in a 4-4 tie. After the Bucs scored one in the first period, Miller answered with a goal, with an assist from Brent Nafzger, to start the scoring for A.L. in the second period. Also scoring in the second were Lewis Kelly, and Zach Chicos, with an assist from Kelly. The Bucs held a 4-3 lead until Avery sniped one to the back of the net with under a minute left in the game. The crowd roared its approval at the display of a true team effort.

A.L.’s second game of Saturday pitted the local boys against Omaha A-2. A.L. won this one fairly easily, with a score of 6-0. Scoring for Albert Lea were Jack Pulley, Miller assisted by Kelly, Avery assisted by Peterson, Cody Rahn assisted by Nate Hogstad and Herfindahl, Kasey Habana assisted by Kelly and Toby Schmitt assisted by Pulley and Matt Carlson.

Sunday morning found Albert Lea playing Omaha A-1 for the third place trophy. Earlier in the season A.L. had lost to this very same Omaha team 3-2 in the New Ulm tourney. Albert Lea ended up in the third place game due to Des Moines winning the tie-breaker on points.

In addition to a very balanced, play-making offense, much credit should also go to the defense for slowing down some big attacking teams. In net for all four games was Tanner Shaft. Shaft’s consistent play in net allowing only seven goals was a major factor in a true team effort all weekend.

The ‘B’ Bantams are off to a great year with two trophies and an 11-3-1 record on the season.

The ‘B’ Bantams are coached by Dick Herfindahl, Mark Runden and Ross and Robert Peterson, whose time and efforts are greatly appreciated by all involved.