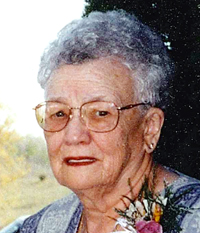 Memorial services will be held at 11 a.m. on Friday at Emmons Lutheran Church with the Rev. Julie Fiske officiating. Inurnment will take place at a later date in Oak Lawn Cemetery, Emmons. The family will greet friends at the church one hour prior to services on Friday. Memorials may be directed to Emmons Lutheran Church, 490 Pearl Street, Emmons, MN, 56029.

Imogene W. (Wilson) Schoenrock, the daughter of Hardie and James Teague Gaston Wilson, was born on the family farm in Cherokee County, Texas, on April 16, 1925. She attended Central High School.

On May 23, 1941, Imogene was united in marriage with Eugene Banks in Alto, Texas, with this marriage later ending in divorce. While employed as a welder at an aircraft assembly plant, Imogene met Claire Orlando Johnson, who was in the Army Air Corps at the time. The couple was wed on Sept. 11, 1943, in Galveston, Texas.

In 1945, Imogene and Claire moved to North Iowa. Claire passed away in January of 1969.

On Oct. 17, 1969, Imogene was married to Edgar Schoenrock at the Emmons Lutheran Church, and the couple resided in Emmons.

Imogene had been a member of the Emmons School Board, she was active in the PTA, and held a number of jobs which included: managing the Emmons Superette, she was a foreman in the pressroom at Walker Deluxe, a bookkeeper for the Speltz Grain Elevator, helped begin Schoenrock Printed Circuits in Lake Mills and was a tool crib operator at Cummins Filtration.

She was preceded in death by her parents; two husbands: Claire and Edgar; a daughter, Ogreta Maureen in 1950; son, Bradley Alan in 1955; and a sister, Ogreta Huttash.