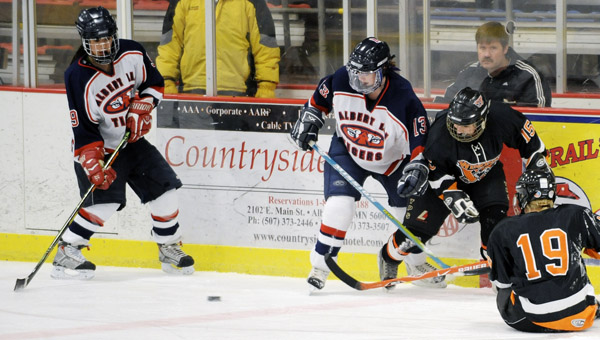 After Albert Lea’s Kaley Waldemar slapped in a goal within the first 60 seconds Friday, it looked as if the Tigers girls’ hockey team would rout the Winona Winhawks.

And they did — it just took a while.

Tied 1-1 after the first period, the Tigers scored six unanswered goals through the game’s final two periods and beat the Winhawks 7-1 at City Arena.

Waldemar and Mariah Leach each scored two goals for the Tigers, who have won six of their last seven games, and Natasha Moyer recorded five points off a goal and four assists.

After Waldermar’s goal 51 seconds into the game, the Winhawks’ Eliza Searcy scored 2:25 into the period to tie the game 1-1.

Both teams went silent until midway through the second when Moyer scored at 9:48 into the period to put the Tigers ahead 2-1.

Leach added another goal 14:02 into the period, and Anna Anderson scored 10 seconds later to give the Tigers a 4-1 leading into the third period.

The Tigers scored three goals within the first 6 1/2 minutes of the third period from Leach, Lauren Draayer and a power play score from Waldemar.

Both teams had 25 shots on goal and Sydney Conley notched her sixth win of the season.

The Tigers played again at 2 p.m. Saturday against Red Wing (3-5-1, 0-3-1 Missota) at City Arena. As of press time results of that game were not known.