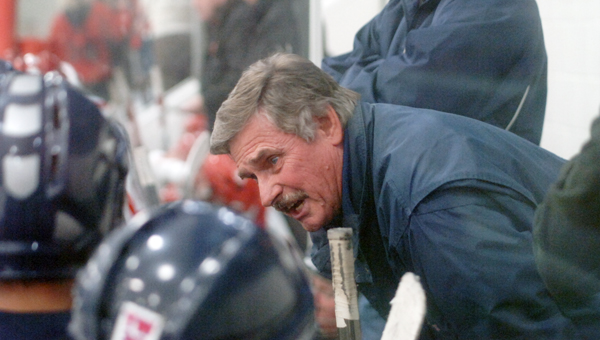 Now, the coach has passed him. 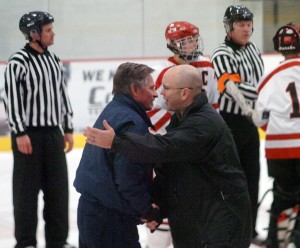 Eric Carlson and Levi Hacker both scored two goals to give Nystrom his 617th career victory in a 7-4 win over the Rochester John Marshall Rockets.

“He’s won more games in less time than anybody,” Nystrom said, of Ikola. “I look at him as the icon of Minnesota hockey, no doubt about it, and to be in the same league with him is a real treat.”

“I’ve been fortunate,” Nystrom said. “I’ve had good kids to work with and good assistants to work with. I’ve got my son who has been with me for 20 years and now I have the leading scorer in Albert Lea history, Jonny Breuer, with me and I couldn’t be happier. It’s fantastic working with these guys and these players.”

Junior center Eric Carlson, who leads the Tigers with 11 points this season, said it’s an honor to be playing for Nystrom.

“It’s a big honor to play for him and to get the win for him,” Carlson said. “He’s a great guy, and he deserves it.”

While the Tigers got the win, they had to fight back as the Rockets came out and took the lead two minutes and 20 seconds in with a Nicholas Paulson goal to take an early 1-0 lead over Albert Lea. 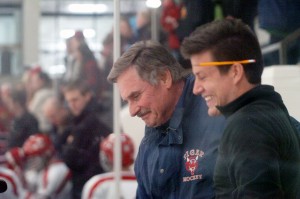 It took only a minute for Albert Lea to respond when defenseman Brady Falk took a pass from Dillon Stolt and beat Rockets goaltender Jacob Garvey to tie the game at 1-1.

The Rockets would add to lead 1:08 later when Zach Johnson snapped the puck into the net to give John Marshall a 2-1 lead with just over 13 minutes left in the first period.

Seven minutes later, it was Anthony Johnson sneaking the puck past Wangen to give the Rockets a 3-1 lead.

However, with just over a minute remaining in the first period, Eric Carlson came up with a play that shifted the momentum of the game in Albert Lea’s favor.

Carlson stole the puck and raced down toward the Rockets’ end of the ice when he was tripped up, sending him crashing in the opposing goaltender and ended up getting a penalty shot.

Carlson took the puck and entered the Rockets’ zone and sniped a shot past Garvey to cut the Rockets lead to 3-2.

“It was a big boost going into the second period,” Nystrom said, of Carlson’s goal. “Instead of being down 3-1, were only down 3-2.”

Albert Lea carried that energy over into the second period and had goals from Luke Cheever and Shea Svendsen to give the Tigers a 4-3 lead after two periods.

In the third period, the Tigers needed only 1:48 to extend their lead.

After a Carlson penalty expired, Carlson jumped out of the penalty box and got a perfect pass to go in on a break away and put the puck in the net to extend the Albert Lea lead to 5-3.

Although, John Marshall would strike three minutes later on a four-on-four situation when Tom Foley snuck the puck past Wangen to cut the Albert Lea lead to 5-4.

Six minutes later, while on the power play, Albert Lea would get their two goal lead back when Levi Hacker slapped a shot past Garvey to give the Tigers a 6-4 lead.

Then four minutes later, it was Hacker again found the back of the net to secure a 7-4 win for Albert Lea.

Griffin Wangen earned the win for the Tigers with 15 saves on 19 shots, while Garvey took the loss for the Rockets with 25 saves on 31 shots.

Carlson and Hacker each recorded two goals and an assist, while Stolt dished out three assists on the night.

After earning Nystrom his 617th victory and a victory in their Big Nine Conference opener, the undefeated Tigers will kickoff a two-game homestand when they host Rochester Century on Thursday night.