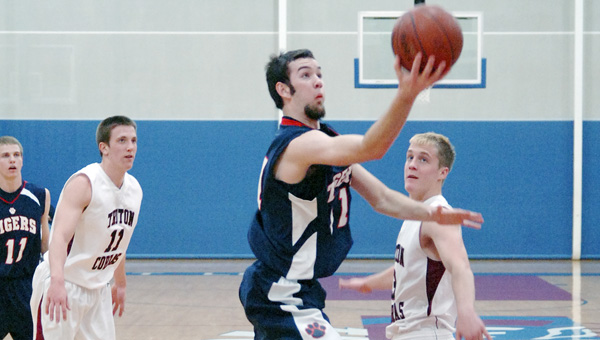 Albert Lea’s Kyle Ooms attempts a layup during the first half Monday against Triton in the first round of the Tiger Classic at Albert Lea High School. Ooms led the Tigers with 12 points in the 61-57 win. -- Jon Theuer

The Albert Lea Tigers boys’ basketball team talked about getting off to a quick start Monday against the Triton Cobras in the first round of the Tiger Classic.

The Tigers accomplished that feat as they scored the games first seven points and shot 42 percent from the field, including a blistering 58 percent from the 3-point as Albert Lea defeated Triton 61-57.

“We’ve had slow starts,” Tigers head coach Lucas Kreuscher said. “Today in our shoot around we worked on the opening tip and the first few possessions of doing this and doing that. I think that helped us.”

Perhaps one of the biggest plays of the game came with 40.9 seconds left.

With Triton trailing 59-57, The Cobra’s Ben Barner drove into the lane and put up a shot, but it was waved off due to an offensive foul.

Silas Randall drew the charge and Albert Lea took advantage on the offensive side off the turnover with an Aaron Klatt layup to put the game out of reach at 61-57.

“Its huge,” Kreuscher said. “If he makes the basket, he’s going to the free throw line and possibly getting a three-point play. Instead, we get the ball back and end up scoring on that turnover.”

In the first half, the Tigers looked to be on cruise control as they ended the first half on a 12-6 run to take a 39-24 lead into halftime.

Albert Lea shot 54 percent in the first half and shot a perfect 5-of-5 from the 3-point line that helped give them a 15-point lead.

“We were open,” Kreuscher said. “Unlike other games, we might have taken shots, but they were contested and they weren’t shots in rhythm. Tonight, our shots were in rhythm.”

Early in the second half, the Tiger’s Alik Smed scored on a lay-up with 17 minutes left to push the lead out to 17.

The Cobras would cut into that lead, as later in the second half, Logan Spitzack converted a three-point play to cut the lead to eight at 55-47.

Triton then used a 16-6 run to cut the Albert Lea lead down to two with 40.9 seconds left.

The Tigers had four scorers in double digits as Kyle Ooms led Albert Lea with 12 points.

With the win, the Tigers move on to play the Hayfield Vikings tonight at 7:30 in the championship round of the Tiger Classic.

“They’re a team that is going to get out in transition. We’ve got to get back on defense a lot better than we did tonight. They like to run a lot of set plays and we have to keep them out of rhythm.”

Tigers fall to Beacons in OT