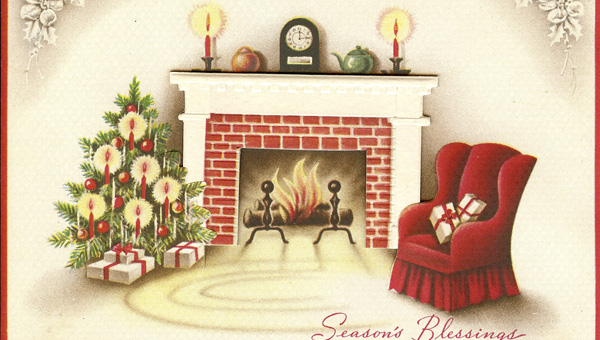 There are many traditional cards and even postcards with the Christmas theme in the archives of the Freeborn County Historical Museum. And within this extensive collection are two dozen Christmas cards complete with the original envelopes.

These cards were donated to the museum about a decade ago. However, the postmarks on the envelopes are dated 1943 and 1944. And the most unusual detail on these envelopes are the postage stamps. All those stamps have a value of a cent and a half and the illustration of Martha Washington.

Martha Washington has the distinction of becoming the nation’s first First Lady when her husband, George, became president. She also had the historical distinction of being the first woman to have her likeness depicted on a U.S. postage stamp. The first was an 8-cent stamp issued in 1902, followed by a 4-cent stamp in 1923 and the penny and a half stamp in 1938.

About six to seven decades ago, there were several rates used for regular U.S. Mail. A penny stamp was used to send a postcard anywhere in the nation. A first-class letter required a 3-cent stamp. The odd penny and a half stamp could be used for a Christmas card. Yet, there were two restrictions. First, the envelope couldn’t be sealed and the back flap had to be tucked in. Second, no separate letter could be enclosed. In reality, about the only detail that could be added to the enclosed Christmas card was a short message and signature of the person sending the seasonal greeting.

(This detail of life in the past has been confirmed during interviews with several local residents.)

There are a few now nearly forgotten details about mail practices of the past noticeable on these envelopes.

One is the postmark clearly showing where the letter was mailed. Today, a Christmas card from a person living on Albert Lea’s north side to a relative on the city’s south side will have a Mankato postmark.

Another detail is based on the placement of the recipient’s street address or rural route number in the lower left corner of the envelope.

Still another detail noticeable on these old envelopes is the lack of zip codes for the towns where the Christmas cards originated and the places where they were to be delivered.

Based on these Christmas card envelopes from 1943-44, an obvious commentary can be made. One just didn’t purchase a single penny and a half stamp at the post office. The logical choice was to purchase these Martha Washington stamps for mailing Christmas cards in even numbers.

Melodic music in the sanctuary during Advent