Alaskan adventure gets better each year

“Everything is nearly copacetic. Always remember that you can’t spell ‘awesome’ without ‘me’ in it. My knee aches a bit in the damp weather. That’s from an old football injury. You remember when we played football? What a career I had.”

“Yes, you played drawback,” I add.

“That’s a time laugh. I’ll laugh when I have the time. My Uncle Curly just turned 100. That’s because he’s never smoked or drank, walks three miles a day, and is asleep by 10 o’clock each night.” 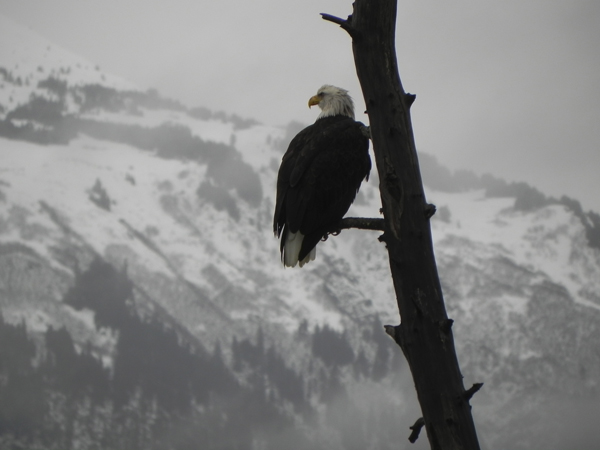 The eagle of the mountains photo by Al Batt.

“I remember Curly’s neighbor Barnaby. Lived the same lifestyle but never cashed a single Social Security check. How come it didn’t work for him?” I ask.

“It’s simple. Barnaby didn’t keep that routine going long enough. The bank sent me a calendar. I didn’t expect it.”

“Blessed are those who expect nothing, for they shall not be disappointed. That was nice of the bank,” I say.

“Nice? I expected them to give me a brand new Buick Regal with spinning hubcaps, OnStar, a stereo with speed-compensated volume, and an interior that wouldn’t show food stains.”

“Why would they give you a Buick?” I ask.

I was dressed like a buffoon — dressing that way is the secret to cold weather survival — when it happened.

I was in Alaska and had that feeling that I was being watched. I suspected it was Sarah Palin, and I was trying to spot her when a bald eagle flew overhead and landed in a nearby tree.

“Why do birds, suddenly appear, whenever you are near…” sang my lovely wife in a key yet to be embraced by the music industry.

Eagles fly over my head at my home in Minnesota. Most things go over my head. Those eagles don’t often land near me. They land in places close to me but not when I’m there. This one was a regal eagle, befitting its position as our national bird. It wasn’t uppity — except for one thing. I looked at the treed eagle. The eagle looked at me. It had the hint of a sneer. I recognize sneers — I have in-laws. I captured its image with my eyes and had it developed in my brain’s darkroom. It’s the largest room in my mind. I employed a real camera also, because I worried that my brain would misplace the photo and there was little chance it’d be ready when promised.

I used my new digital camera. I had to buy a new camera after my cousin hit me over the head with my Polaroid instant camera claiming that taking his picture would steal his soul. Odd behavior for a Lutheran. My new device has a zoom so I can take bad photos from great distances. The photos of the raptor turned out swell. I blame that on the subject — a bald eagle perched in a leafless cottonwood with a mountain powdered in November snow as the background. It was similar to that single Christmas ornament in Charlie Brown’s tree — only the tree wasn’t stunted like Charlie’s. I doubt that digital cameras will ever catch on, but I was happy I had one with me. I could have used the camera in my smarter-than-me phone, but I prefer using it for taking portraits of my ear.

I was in Haines, Alaska. If the movie, “Trains, Planes and Automobiles” had been titled “Boats, Planes and Automobiles” and the lead characters (John Candy and Steve Martin) were both played by me, that film would depict my journey to Haines in November. Haines is where more eagles than I could count are present each November. And I can count. I once got a C- on a seventh-grade math test and earned the reputation as the family brain.

Some have described Haines as quirky. If it is, it’s probably why I feel so at home there. It doesn’t seem quirky to me. It seems delightful. The American Bald Eagle Foundation is located in Haines. They offer a festival, programs, live birds, live people and a gift shop.

Haines is where eagles are numerous and cats are nervous. A tomcat I know spends a lot of time looking up. Cats eat birds and attentive cats worry about being eaten by birds.

The Chilkat River is where the eagles feed on weary salmon flailing about in open water. When eagles attack is not a documentary. It’s a buffet. An interesting aside, I could find no documented record of a salmon ever attacking an eagle. That makes me go “hmmm.” The area is a photographer’s dream. Shutters shudder in glee. People come from around the world to view eagles. The Haines area is so scenic that it makes you look — it fills holes in lives.

A teen, jaded by his lack of years, stood beside me as I looked at the eagle in the cottonwood tree. He smiled and said, “Awesome!”

I returned the smile and said the word of my generation, “Cool.”

Each year, I say, “That was even better than last year.”

“How long do red-tailed hawks live?” The oldest documented in the wild was 27 years and 9 months old. If a red-tail survives its first year — over 60 percent don’t — it lives 12 to 16 years.

“Enjoy the little things, for one day you may look back and realize they were the big things.” — Robert Brault

“The Hopi Indians believe that our daily rituals and prayers literally keep this world spinning on its axis. For me, feeding the seagulls is one of those everyday prayers.” — Brenda Peterson