Ollie Matilda Cook, 101, of Glenville, died at Prairie Manor in Blooming Prairie Monday morning, Jan. 24, 2011. She was born Nov. 10, 1909, to Fred and Hannah (Pierson Anderson) Cole in Emmet County, Iowa. She married Ralph Cook on Oct. 30, 1929, in Waseca. They made their home in the London area where Ollie shared the farm work with her husband as they raised their ten children. Ralph died on Nov. 19, 1964, and Ollie continued to live on the farm until 2009 when she moved to Prairie Manor. A member of Faith Lutheran Church in London, she cooked and baked, crocheted, liked to play cards with the grandchildren and loved her whole family. Ollie was good at spelling and liked to do Prizeword Pete in the newspaper. She also enjoyed a good joke. 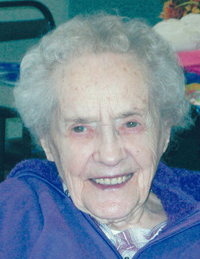 She was preceded in death by her parents; her husband, Ralph; three sons; two daughter-in-laws; two brothers and five sisters.

Funeral services will be held at 1 p.m. Friday at Faith Lutheran Church in London with the Rev. Kent Otterman officiating. Interment is at London Cemetery. Friends may call from 4 to 6 p.m. Thursday at Worlein Funeral Home in Austin and at the church one hour prior to the service. Condolences may be expressed to the family online at www.worlein.com.