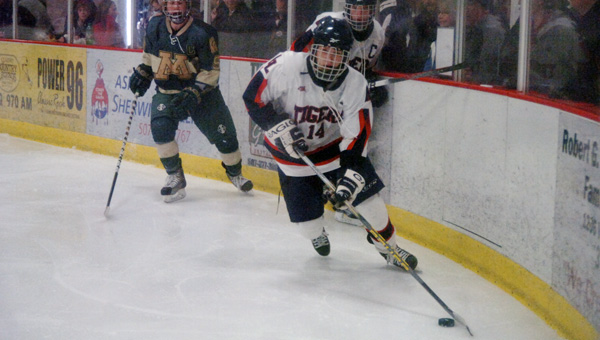 Albert Lea junior Levi Hacker (14) takes the puck during the first period Saturday against the Rochester Mayo Spartans at City Arena. The Tigers beat the Spartans 6-2 and are now leading the Big Nine Conference. -- Jon Theuer

“We were opportunists on several occasions,” Tigers head coach Roy Nystrom said. “We made some nice plays and scored a lot of goals. We out shot them 40-26 and we controlled the majority of the game.”

Things started out shaky for the Tigers, though, in the first period.

The Spartans (8-11, 6-2) got on the board first as Ryan Martin took a pass from Jack Dingle and put it past Albert Lea goalie Griffin Wangen at the 7 minute, 25 second mark to give Mayo an early 1-0 lead.

The Tigers would respond just under six minutes later, as Herbst took a pass from Carlson and found the back of the net to tie the game at 1-1 after the first period.

After the first period, the Tigers found their footing.

Herbst scored his second goal of the game on an assist from Carlson at the 2:11 mark to give the Tigers a 2-1 lead.

Less than a minute later, Shea Svendsen unloaded a shot from just inside the blue line that found the back of the net to increase the the Tigers lead to 3-1.

The Tigers weren’t done as Levi Hacker notched a power-play goal at the 15:39 mark to give Albert Lea a 4-1 lead after two periods of play.

The Tigers added to the lead in the third period as Austin Larson took a pass from Nathan Stadheim and scored at the 2:21 mark to give Albert Lea a 5-1 lead.

The Spartans would cut the lead to three goals less than a minute later when Steve Serratore scored at the 3:17 mark to cut the score to 5-2.

About six minutes later, Carlson responded with a goal at the 9:53 mark to give Albert Lea a 6-2 lead.

Over the second and third periods of play, the Tigers outscored the Spartans 5-1 and out-shot Mayo 28-17.

“We scored five goals over the last two periods and put the pressure on them,” Nystrom said. “We had some nice plays, we forechecked well and got the puck into the offensive zone where we were able to put it away.”

Wangen earned the win for Albert Lea as he made 24 saves on 26 shots.

Alex VanGalder took the loss for the Spartans as he had 34 saves on 40 shots.

Along with the win, Nystrom says he was proud of the effort his team put forth on the ice Saturday night.

“The boys played hard,” he said. “I’m just proud of them for the way they played tonight. We came out strong and we were able to kill off some penalties. Although we gave them some real good scoring chances on our penalties. But it was a nice win no doubt about it.”