“Everything is nearly copacetic. Christmas was different when I was a boy. Ma used to drop us kids off at the toy aisle of the Captain Store (it wasn’t good enough to be a general store) and then she’d go to work. One year, Santa brought me a snow shovel. I remember my sister Cruella getting a doll made from tin blown off the roof of the barn. She named it Jaggedy Ann. Cruella had laser eye surgery this year, but she still can’t make toast by staring at a loaf of bread. My boy Craigie is a cartiologist.”

“Craigie is a cardiologist?” I say.

“No, he’s a cartiologist. He gathers up all the shopping carts outside the Here and There Store. I stopped there yesterday. I go there at least once a month.”

“I didn’t know you were such a shopper,” I say.

“I’m not. I go there because they keep perfume and cologne on tap. People sample it by spraying it into the air. I walk through that wall of scents, and I don’t have to take a bath for a week. This winter is getting to Cruella. She does nothing but stare through the window. If she doesn’t stop soon, I’ll have to let her in.” 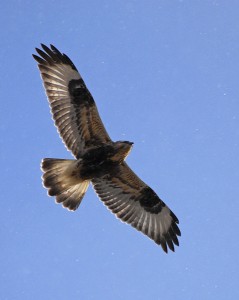 A rough-legged hawk by Darcy Sime of Alden.

A friend tossed a bit of food to the mallards in a channel. One female, either shy or bullied, remained distant from the rest of the flock that was in a feeding frenzy that would have made sharks jealous. The friend threw a hunk of food toward that hen in the hopes that she would not go hungry. It was a perfect pitch. The foodstuff hit the duck on the top of her head. She quickly retrieved the chow and was gobbling it down when a fish came up from below in a tardy attempt to grab the bait. It frightened the duck. She swallowed the food but remained nervously apart from the flock.

I galumphed my way to the bird feeders. I had to shovel some white stuff because the snow had become so deep that birds couldn’t fly over it. The house sparrows had not been prominent in my yard for most of the year, but they moved in after Christmas like jobless relatives. My snow removal duties completed, I trudged back to the house, feeling valuable after making the world safe for bird feeding.

Safely ensconced in my home, I watched from my window as a gray squirrel ran at a crow that was feeding on the ground not far from the bushytail. The crow flew just far enough to escape the wrath of the angry squirrel. The squirrel was feeling good about itself, walking in a John Wayne swagger, when another crow flew from a nearby tree and buzzed the squirrel, scaring the sunflower seeds out of it.

It’s a jungle out there

Joe Conley of Mounds View told me that he watched a crow searching the tall grass. The crow found a mouse nest and proceeded to consume the young mice and their mother. Crows can be good mousers. It’s a jungle out there.

“What kind of bird is the partridge of ‘a partridge in a pear tree’ fame?” It is likely the red-legged partridge, similar to the chukar. In “The Twelve Days of Christmas,” the calling birds were originally “colly birds.” The word colly means “black as coal” and referenced the common blackbird of Europe. The golden rings referred to ring-necked pheasants.

“What do pheasants eat?” Pheasants eat insects, weed seeds, berries, corn, soybeans and other crops. I have seen pheasants perched in trees and feeding on berries.

“Where do earthworms go during the winter?” They do a vertical migration in the fall and move deeper into the earth, below the frostline. There they spend the winter in inactivity.

“Who is the boss bird in a flock?” The command of a flock is based upon a distinct pecking order. The higher-ranking birds make the navigational decisions and the other birds copy their flight movements — the followers follow.

“What can I put out for an over-wintering robin to eat?” I put soft raisins on the ground for them but small pieces of any fruit or berry placed on the ground might work — apples, pears, oranges, cherries, raspberries, blueberries, strawberries, cranberries, etc. Softened dog food and mealworms are also on a robin’s diet. The robins would need to beat squirrels and other birds to the food. Robins are not true feeder birds so they are commonly slow to come to food. They will occasionally feed on suet and regularly feed on wild berries.

“Why are goose bumps called ‘goose bumps’?” Goose bumps are also called “goose pimples,” “gooseflesh” and “chicken skin.” Goose bumps get their name from what you might expect — geese. When the feathers of a goose are plucked, the skin shows protrusions where the feathers had been, and these bumps resemble the human phenomenon. The goose bumps that we get begin with a stimulus that causes an involuntary nervous discharge from the sympathetic nervous system. This raises the hair follicles above the skin. Medical science has never found a definite reason why goose bumps appear, but theories abound. One theory is that it makes us look bigger to predators. That’s why you get goose bumps when you’re around an IRS auditor. Another is that it keeps us warmer by increasing the amount of air between the hairs and that traps body heat.

In Greek mythology, when Pandora opened the box and all the woes of the world — such as war, famine and plague escaped — there remained a small white moth named “Hope.”

Superstition says that if you kill a spider, it will rain.

A fruit grower in Japan claims that bananas ripen faster when Mozart symphonies play near them.

“Nature has no mercy at all. Nature says, ‘I’m going to snow. If you have on a bikini and no snowshoes, that’s tough. I am going to snow anyway.’” — Maya Angelou

“If you see someone without a smile, give ’em yours!” — Dolly Parton

A thank you to all who helped the historical…