Winter can be pleasant but also dangerous

“Everything is nearly copacetic. I spend half my life trying to stay awake and the other half trying to get to sleep. I’ve tried counting sheep. I just finished New Zealand’s. I went bear hunting with Weasel. I had a bear in my sights. I’d have gotten it, too, if it hadn’t been for the zookeeper. At least the weather has been miserable. I knew this winter was going to be a bearcat because my cows had longer hair on the north side of their bodies than they did on the south side. But there is good news.”

“Your sister let you win at arm wrestling?” I say.

“Now that’s funny. The good news is that I’m about to throw in the towel on that diet and exercise program I’ve been on.”

“It should be sweat-free,” I interject. “Have you tried eating in front of a mirror?”

“This is me ignoring what you just said. I’m going to lose weight. I’ve moved the couch as far from the refrigerator as possible, and I bought heavier forks.”

“Why are you on a physical fitness kick?” I ask.

“I used to dream about running a marathon. I want to get to the point where I can start dreaming about running in two marathons.”

Watching birds from a window 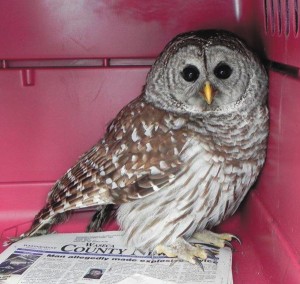 Winter is like swimming with sharks. It can be pleasant but there are always dangers. The day was so cold that the rabbits were wearing earmuffs and snow fell in small flakes. I mumbled, “Little snow, big snow. Big snow, little snow,” to myself. That means that little flakes generally lead to more accumulation than do big flakes. The feeders were busy. The birds were feeding frenetically when they took flight en masse into deep cover. That was a sign that an accipiter (Cooper’s hawk or sharp-shinned hawk) was near. Accipiters are built for maneuverability more than for speed. Chasing small birds through tight quarters can be hazardous. Many accipiters suffer broken bones due to such pursuits. Raptors that eat mammals succeed in capturing prey only about 20 percent of the time. This success rate drops drastically for hawks attempting to eat birds. Birds are difficult prey items to catch. Studies have shown that bird-eating raptors succeed in catching prey only 7.6 percent of the time.

Joel Dunnette of Byron said that Rochester hosts hundreds of crows at night during the winter. He refers to them as “crowmuters” since they leave town at daylight and return at dusk like clockwork. The streaming flocks of countless crows can be quite a sight. During the day, the crows leave downtown and disperse to rural and suburban areas. Joel suspects that the crows prefer the trees and buildings of downtown Rochester for overnight roosting due to warmth and/or safety from predators.

Deer hides were used as a medium of exchange on the American frontier. That’s where the term “buck” came from to indicate currency. It is shortened from “buckskin.”

There are approximately 900,000 deer in Virginia. There are nearly 900,000 deer hunters in Pennsylvania, which has about 1.5 million whitetails. The deer in both states had been nearly extirpated by the end of the 19th century due to over-harvesting. Deer were reintroduced to both states.

In 1930, a Detroit industrialist named Edwin S. George donated 1,146 acres of abandoned southern Michigan farmland to the University of Michigan for use as a natural laboratory. It became known as the George Reserve. At the time George acquired the property, there were almost no deer in southern Michigan. In 1927, George enclosed the entire site inside a 7 1/2-foot high fence so that no deer could get in and no deer could get out. The following year, he released six white-tailed deer, two bucks and four pregnant does, inside the George Reserve. The deer thrived. In 1933, biologists counted 160 deer in the reserve’s first annual deer census. In just six years, the population had grown from 6 to 160 deer.

The 2011 Great Backyard Bird Count will take place Feb. 18 through Feb. 21. It’s an annual event that engages birdwatchers of all ages in counting birds and creating a snapshot of where the birds are across the continent. Anyone can participate, from beginning birdwatchers to experts. It takes as little as 15 minutes of one day or you could count for as long as you wish on each day. It’s free, fun and easy — and it helps the birds. Scientists and bird enthusiasts learn by knowing where the birds are. Bird populations are dynamic, constantly in flux. Counts answer questions. How will this winter’s snow and cold temperatures influence bird populations? Where are winter finches and other “irruptive” species that appear in large numbers during some years but not others? How will the timing of birds’ migrations compare with past years? How are diseases, such as West Nile virus, affecting birds in different regions? What differences in bird diversity are apparent in cities compared to suburban, rural and natural areas? Are any species undergoing troublesome declines that point to the need for conservation attention? To participate, visit http://birdsource.org/gbbc.

An injured great horned owl is at the Raptor Center thanks to Clyde Bonnema of Hollandale, Lee and Jodi Loverink of Ellendale, and Larry and Sylvia Zevenbergen of Hollandale. Joel Eastvold of Hartland helped make the same thing possible for an injured barred owl.

“As long as I live, I’ll hear waterfalls and birds and winds sing. I’ll interpret the rocks, learn the language of flood, storm and the avalanche. I’ll acquaint myself with the glaciers and wild gardens, and get as near the heart of the world as I can.” — John Muir

“Riches do not consist in the possession of treasures, but in the use made of them.” — Napoleon Bonaparte

White snow is full of colors