Backyard birding can be difficult to watch

“Everything is nearly copacetic. I’ve put on another pound or five.”

“It’s all that old-fashioned, homemade pie you’ve been eating,” I say.

“You’ve slobbered a bibful there. The lard works in mysterious ways. I was driving to town yesterday. I was watching the clouds. I’m a cloud watcher. I’ve been one all my life. I like to know what the weather is going to be, and the clouds spill the beans. Anyway, I’m on my way to town and I got a ticket from Sheriff Hank Uft.”

“For attempted speeding?” I wonder aloud.

“No! I was watching the clouds when a bird hit my windshield. Whaaaapp! It hit the glass a larruping good lick.”

“How should I know? It was the windshield-hitting kind of bird. It took my mind off the clouds. The bird was stuck in the driver’s side windshield wiper. I turned on the wipers to free the bird and allow me to see the road. It worked and the wiper flipped the bird onto the car behind me. It was a squad car. That’s when Hank gave me a ticket.” 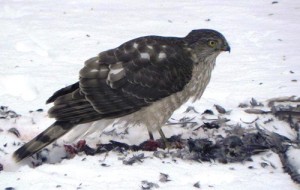 Al Batt wants to know what kind of accipiter this is — contact him if you know. -- Photo courtesy Al Batt

“For flipping the bird to a police officer.”

I saw a hawk kill and eat a starling in my yard. It plucked the starling as I used to pluck a chicken on a Saturday. One minute the starling had been eating, the next it was being eaten. Things like this are not always easy to watch. It was the Discovery Channel in my yard. TV shows depicting predators in action, like sharks or lions, are extremely popular. The hawk is doing what hawks do. I can’t criticize the hawk. I like eating chicken. I suspect a starling tastes just like chicken.

What kind of hawk do you think it was — sharp-shinned or Cooper’s? There are no swell prizes for the correct answer but I will think of you warmly.

“How much wood would a woodchuck chuck if a woodchuck could chuck wood?” A wise woodchuck (groundhog or whistlepig) would hire a beaver. A beaver is much more skilled at moving timber. A wildlife biologist measured the inside volume of a typical woodchuck burrow and estimated that, if wood filled the hole instead of dirt, the woodchuck would have chucked about 700 pounds.

“Do birds eat snow?” Birds can and do eat snow, but for the body to make use of it as a source of water it must melt the snow. That creates increased energy needs and a requirement for additional food to provide the energy to melt snow and maintain body temperature. Eating snow uses energy better spent staying warm. Imagine that you are shoveling snow on a frigid, windy day and you become thirsty. In order to quench your thirst, you scoop a cup of snow and consume it outdoors. It would be chilling. If you have filled a glass with snow and allowed it to melt, you know how much snow is required to fill a glass with water. A bird must devour a substantial amount of snow to get the water it needs.

“You wrote that female hawks are bigger than males. Why is that?” Female birds of prey are larger than the males. A mammal-hunting buteo (a type of soaring hawk, that prefers grassland and other open habitats, such as our most common hawk — the red-tailed hawk), male is somewhat smaller than the female of the species. Bird-hunting accipiter females are considerably larger than the males. There are a number of suggestions given as to why this occurs. One hypothesis for the female’s larger size is that it protects her from aggressive males equipped with sharp talons and bills. Some scientists believe that the female has to dominate the male for proper pair bonding to occur and for the male to fulfill his role as the food provider to female and young. Bird-hunting hawks are assumed to be quite aggressive and exhibit great size difference. Another hypothesis proposes that the size difference allows the sexes to hunt different prey and reduces competition for food. Competition is more severe among accipiters than among other hawks, since their small, nimble prey are good at avoiding being caught. Data indicates that the hunting success of bird-eating raptors is less than half that of raptors preying on mammals and a sixth of that of raptors eating insects. The male hawk specializes on small prey and the female on large prey. The male feeds the female and young at the beginning of the nesting season. The female becomes an active hunter when the nestlings are larger. Perhaps the females need to be larger because they must accumulate reserves in order to produce eggs. The females do not hunt for a significant period while incubating eggs and brooding young. They avoid the risks of the hunt during that time, relying on the smaller male to feed the entire family. What is the reason for the difference in size? Despite all the possibilities above, no one knows for sure.

How can you tell if it’s a stalactite or a stalagmite? When the mites go up, the tights go down.

Folklore says that cows gathered in a pasture means a storm is coming.

The State Climatology Office evaluated the climate data from 1891 through 2010 and concluded that 2010 was the wettest year in history on a statewide basis. The average precipitation was 34.10 inches, which surpassed 1977 with a statewide average of 33.74 inches.

A Native American legend says that the great blue heron is the soul of a wise man returned to earth on a mysterious pilgrimage.

I am proud to have been inducted into Ray Brown’s Talkin’ Birds Hall of Fame. Ray does a great radio show in Boston about birding.

“I arise in the morning torn between a desire to improve the world and a desire to enjoy the world. This makes it hard to plan the day.” — E. B. White

“Nature uses human imagination to lift her work of creation to even higher levels.” — Luigi Pirandello